The Moon-Modi summit was set to follow an official welcome ceremony at India's presidential palace in New Delhi.

The South Korean president arrived here on Sunday for a four-day state visit. The trip marks Moon's first visit to India since taking office in May 2017. He is currently on a two-nation tour that will later take him to Singapore.

The welcome ceremony was attended by Indian President Ram Nath Kovind and the Indian prime minister. 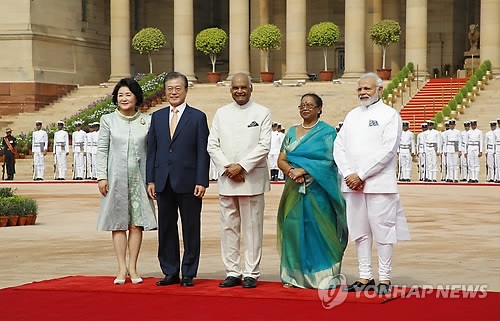 Shortly after the ceremony, Moon made a trip to Raj Ghat, or the Gandhi Memorial, to pay his respect to the late Indian activist and leader Mahatma Gandhi.

The Moon-Modi summit was widely expected to focus on ways to further promote economic cooperation between the two countries.

"India and South Korea are the world's seventh and 11th largest economies. However, trade between the two countries came to US$20 billion last year, which is not small but far short of our expectations," Moon said in a South Korea-India business forum held in New Delhi on Monday.

The Moon-Modi summit will be their second since Moon took office in May 2017. However, it follows a series of personal and friendly encounters between the two leaders here on Monday.

Modi joined the South Korean president on his trip to the National Gandhi Museum in New Delhi in what many local residents here called a rare and apparent gesture of friendship from the Indian leader.

He later accompanied the South Korean leader on his visit to a newly constructed local production facility of Samsung Electronics Co. 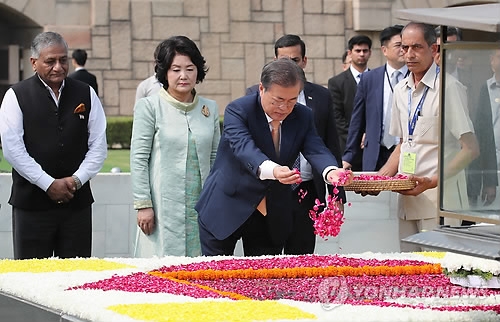 "I have never seen Prime Minister Modi treat a visiting foreign leader with such enthusiasm and affection," a South Korean diplomat here told reporters, speaking on condition of anonymity.

Modi was scheduled to host an official lunch for Moon later in the day before they hold a joint press conference on the outcome of their talks. They will also attend a signing ceremony for fresh agreements reached between their governments and businesses, Cheong Wa Dae said.

Moon will later hold separate talks with his Indian counterpart and attend a state dinner to be hosted by the Indian president.

He will leave India on Wednesday for Singapore, the second and last lag of his two-nation trip that will end Friday.