SEOUL, July 9 (Yonhap) -- The U.S. and North Korea are expected to seek denuclearization in a "sustained" and "condensed" manner as their officials will meet to discuss details to make the North give up its nuclear weapons program, Seoul's unification minister said Monday.

Cho Moung-gyon said the two countries have demonstrated they are moving "in the same direction" in implementing the summit agreement their leaders reached in last month's summit.

"It is necessary (for the North and the U.S.) to work on ironing out their differences in initial stages of talks," Cho said in a speech at a forum in Seoul. "I expect that the denuclearization and peace building will likely be carried out in a sustained and condensed manner going forward."

Last week, U.S. Secretary of State Mike Pompeo visited Pyongyang and met with North Korean officials, including Kim Yong-chol, a close aide to leader Kim Jong-un, to work out details on how to denuclearize the North.

Pompeo called the meetings "productive," but the North's foreign ministry issued a statement hours after his departure Saturday, expressing displeasure with Washington making "unilateral" and "gangster-like" demands for denuclearization.

The meetings came weeks after the historic summit between U.S. President Donald Trump and North Korean leader Kim in Singapore at which they agreed to work toward complete denuclearization.

Cho assured that the two countries have started follow-up talks on the summit, saying they are moving "in the same direction" and also "strongly committed" to implementing their agreement. 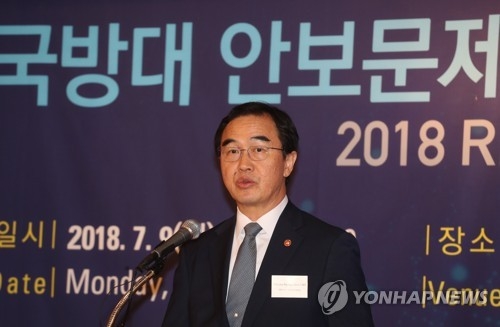