ASTANA, July 9 (Yonhap) -- Kazakhstan celebrated the 20th anniversary of Astana's status as its capital on July 6 with ceremonies and festivities across the Central Asian country.

Called the "Pearl of the Steppes," Astana -- developed based on the ideas of Kazakh President Nursultan Nazarbayev -- is about to open a brand-new page in its development, Kazakhstan's leading news agency Kazinform reported.

Previously, Astana Day was observed on June 10 because the city was officially unveiled as the new capital of Kazakhstan to the world on June 10, 1998. However, with amendments adopted to the Law "On holidays in the Republic of Kazakhstan" on July 18, 2008, the new holiday, Capital City Day -- July 6 -- was instituted. 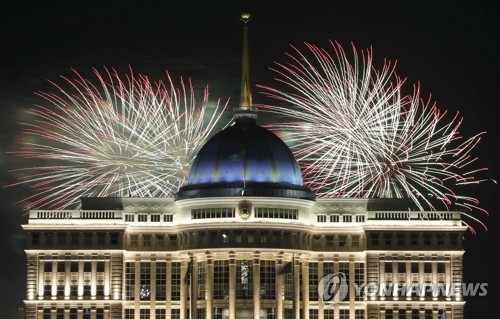 President Nazarbayev suggested moving the capital city to what was then Akmola at a session of Kazakhstan's Supreme Council on July 6, 1994.

As the program of Astana Day celebrations is fully packed this year, the festive events kicked off on July 4 with a flag-raising ceremony at the State Symbols Square with the participation of Nazarbayev.

"Today I wholeheartedly congratulate all of us on the 20th anniversary of our capital, Astana. For the history 20 years is just an instant. We've managed to build a megapolis which is a home to 1.2 million people," Nazarbayev was quoted as saying at the ceremony.
(END)