SEOUL, July 9 (Yonhap) -- The office of President Moon Jae-in on Monday played down differences between the United States and North Korea over the issue of declaring an end to the Korean War, saying it's part of a process to reach an agreement.

The talks didn't apparently go smoothly, with the North's foreign ministry openly criticizing the U.S. for making what it said was a "unilateral and gangster-like" demand for "complete, verifiable and irreversible" denuclearization (CVID).

During the talks, the North also said, it raised the issue of declaring a formal end to the 1950-53 Korean War on the occasion of the 65th anniversary this month of the 1953 armistice that ended the Korean War fighting, but the U.S. put forward pretexts to put the issue off.

The North said the declaration of the war's end is a prerequisite for building trust between the sides.

On Monday, officials at the presidential office Cheong Wa Dae acknowledged that there are differences between the U.S. and the North over the issue of declaring the war's end but stressed that those differences are not insurmountable.

"Declaring an end to the war is an issue that President Moon took the lead in raising," presidential spokesman Kim Eui-kyeom said. "After all, it will boil down to when and how it will be done, and I believe that (the sides) are in the process of reaching agreement on all issues, including a declaration of the war's end."

Another official also told Yonhap News Agency by phone on the condition of anonymity that the U.S. and the North have different thoughts on such a declaration, but it's not that the differences are too big to overcome.

Spokesman Kim also said that the U.S. and the North appear to be trying to gain "higher ground" in negotiations going forward.

"Nine hours of negotiations were held for two days, and I believe this was the first time that the two sides have put forward what they want in an open manner," Kim said, adding that neither side wanted to let the talks break down.

Kim said that President Moon will be playing a role of a facilitator.

"Though we can't disclose every detail, we're communicating with the U.S. through various channels," he said. 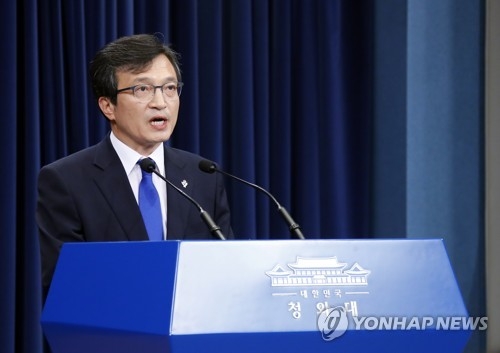