SEOUL, July 9 (Yonhap) – The South Korean business community on Monday called for differentiated application of the minimum wage hike based on the type and size of firms, as the government moves to find a middle ground for next year's minimum hourly wage.

Labor representatives have demanded a 43.3 percent hike for next year, while the management insisted it remained unchanged at the current 7,530 won (US$6.80).

"We hope next year's minimum wage to be decided at a reasonable level considering our economic condition, employment status and companies' solvency," six organizations representing local businesses said in a joint statement.

"The differentiated application has been discussed at the tripartite committee every year as a mere formality, but now is the time to really consider how to realize this option," they said.

South Korea raised the hourly minimum wage by 16.4 percent in January, the biggest hike in nearly two decades, with a plan to increase the threshold to 10,000 won by 2020.

The business sector has been demanding that the minimum wage hike be applied differently in consideration of small business owners, with the deadline for next year's minimum wage decision slated for Saturday.

In late May, parliament passed a revised wage bill that includes regular bonuses and welfare allowances into the calculation of the legal minimum wage following the demand from the business sector. Labor groups have protested the decision, saying that it effectively offset the increase of the country's minimum wage. 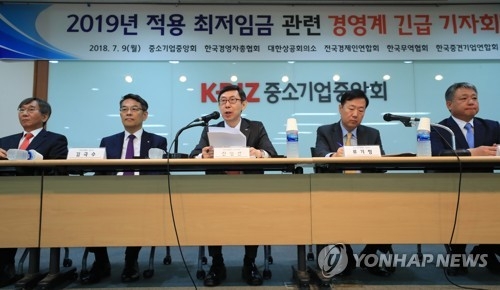