"The government will work to make sure the development in the relationship between the two countries will lead to changes in the lives of our fellow countrymen here," the president said while meeting with South Korean residents and business representatives in New Delhi.

Moon arrived in New Delhi on Sunday for a four-day state visit.

"Shortly after my inauguration, I sent a special envoy to India, becoming the first president in history to do so, as I hoped to upgrade the country's relationship with India to the level of those with the four major powers," Moon told the meeting, referring to China, Japan, Russia and the United States as the major powers. 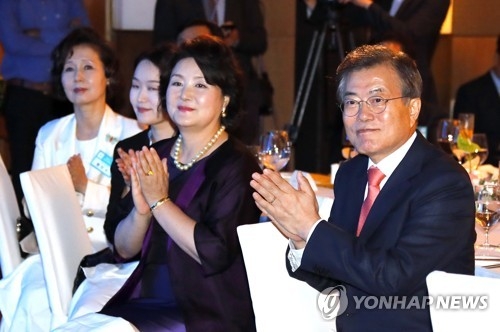 Moon's remarks came one day before he was set to hold a bilateral summit with Indian Prime Minister Narendra Modi.

"In November last year, the government announced the New Southern Policy that encompasses India and the Association of Southeast Asian Nations. Prime Minister Modi too is pushing for his Act East Policy, and places great importance in his country's relationship with our country as a key nation of economic cooperation," the president said.

"Right now, South Korea and India are facing the best chance to develop their bilateral relationship," he added. "Tomorrow, I will meet Prime Minister Modi and President (Ram Nath) Kovind and discuss practical ways for the two countries to practically cooperate in various areas. I will work to meet the expectation of my fellow countrymen and open a new horizon of joint prosperity between South Korea and India."

"First, the government will greatly expand business opportunities for our companies by expanding the practical cooperation between the two countries. It will also help remove difficulties faced by our companies here by closely consulting with the Indian government," the president said.

"It will also strengthen its cooperation in consular services. By holding regular visits and talks between the leaders of the two countries, we will create a permanent joint consultation body between the two governments to improve issues related to visa issuance," he said.

The South Korean president also vowed continued cooperation between the two countries in establishing peace on the Korean Peninsula, noting India's support has been a great help to the inter-Korean rapprochement that followed his historic summit with North Korean leader Kim Jong-un on April 27.

"The government will continue to move toward peace and prosperity while working with India and the rest of the international community," President Moon said.