Abadula Gemeda, who served as a speaker of Ethiopia's lower house of parliament, arrived in South Korea on Friday for a weeklong visit in his capacity as special envoy of Ethiopian Prime Minister Abiy Ahmed.

During the meeting with Lee, Abadula explained in detail the new Ethiopian government's vision and policy, including efforts to move democracy and economic development forward, and expressed hope for strengthening relations with South Korea, according to Lee's office.

The envoy said the country's new prime minister is prioritizing cooperation with South Korea and called for Seoul's continued support for the African nation, such as expanding development assistance and technological cooperation.

Abadula also praised South Korea for its efforts to make peace with North Korea, saying Ethiopia will continue to back Seoul's efforts to realize peace and prosperity on the Korean Peninsula, according to the office.

Lee noted that relations between the two countries were forged in blood as Ethiopia sent troops all the way to South Korea to help fight against North Korea during the 1950-53 Korean War. He also said the South considers it an honorable responsibility to provide assistance to Ethiopia and other developing nations.

Lee also said he supports the new Ethiopian government's reform efforts and expressed hope that South Korea's government and businesses will be able to contribute to the country's development.

Lee also asked Ethiopia to pay greater attention to addressing problems South Korean companies face when doing business in the African nation so as for more Korean firms to operate in the country, the office said. 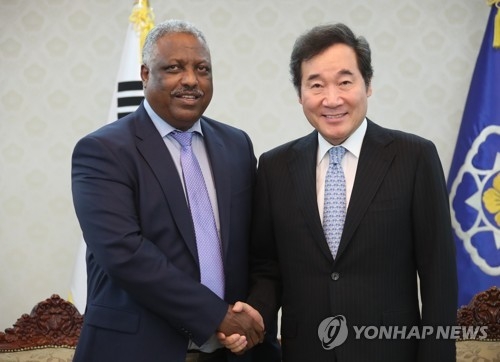