The Indian prime minister made a surprise appearance Monday to join Moon on his visit to the National Gandhi Museum in New Delhi.

He was again set to join the South Korean president on a field excursion to a new production facility of South Korea's Samsung Electronics Co. in Noida later in the day, according to Cheong Wa Dae. 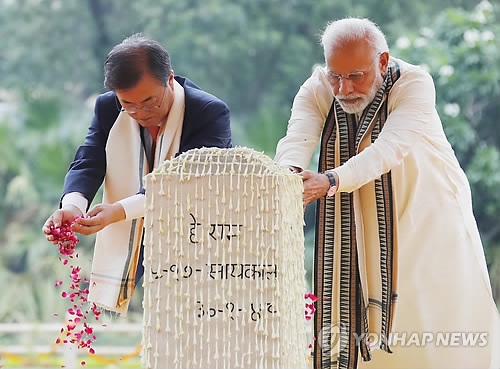 The series of encounters between the leaders of the two countries came one day before they were set to hold a bilateral summit.

Moon arrived here Sunday for a state visit -- his first trip to India since taking office in May 2017.

Cheong Wa Dae officials said Moon and Modi will meet on 10 different occasions during Moon's four-day visit here -- an extremely high number of encounters between two leaders, even during a state visit.

The scheduled encounters include an official welcome ceremony for Moon to be held Tuesday and bilateral and expanded summit meetings to follow.

Modi will host an official lunch for the visiting South Korean head of state and will also attend a state dinner to be hosted by Moon's Indian counterpart, Ram Nath Kovind.

"India has arranged a very special schedule for the president with Prime Minister Modi jointly visiting the Mahatma Gandhi Memorial with a foreign leader for the first time in history and also attending the inauguration ceremony of a factory, in which the Indian government has no stake," Cheong Wa Dae said in a press release.

Moon's state visit to India was at an invitation from the Indian leader, though it also comes as part of his New Southern Policy, which seeks to greatly expand South Korea's diplomatic and economic relations with India and the 10 member countries of the Association of Southeast Asian Nations.

Modi was one of few world leaders to congratulate Moon on his election last year with a social media post written in the Korean language.

The South Korean president will wrap up his visit here on Wednesday to head for Singapore, where he will hold a bilateral summit with Prime Minister Lee Hsien Loong.

He will return home Friday.