SEOUL, July 9 (Yonhap) -- New U.S. Ambassador to South Korea Harry Harris has met with a senior CIA official and was briefed about a recent trip to North Korea by U.S. Secretary of State Mike Pompeo.

The U.S. embassy in Seoul announced on its official Twitter account on Monday that Harris was briefed by Andrew Kim, head of the CIA's Korea Mission Center, who accompanied Pompeo on last week's trip to Pyongyang. No details were given. 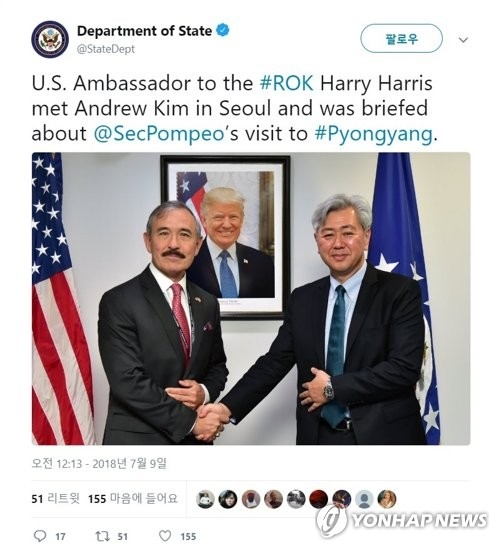 The meeting is the U.S. envoy's first public activity since he arrived in Seoul on Saturday to fill the ambassadorial post that had been vacant since January last year.

Pompeo visited Pyongyang last week to try to map out details of the denuclearization pledged by North Korean leader Kim Jong-un in his summit with U.S. President Donald Trump in Singapore in June.

North Korea's Foreign Ministry has accused Pompeo of presenting a "unilateral and gangster-like" demand for "complete, verifiable and irreversible" denuclearization.

On Sunday, Pompeo said the U.S. has made fair demands on North Korea in denuclearization talks and added, "If those requests were 'gangster-like' then the world is a gangster, because there was a unanimous decision at the U.N. Security Council about what needs to be achieved."