Trump wrote the message on Twitter after U.S. Secretary of State Mike Pompeo visited Pyongyang over the weekend to flesh out details of the two leaders' denuclearization deal.

"I have confidence that Kim Jong Un will honor the contract we signed &, even more importantly, our handshake," Trump tweeted. "We agreed to the denuclearization of North Korea. China, on the other hand, may be exerting negative pressure on a deal because of our posture on Chinese Trade -- Hope Not!"

At their historic summit in Singapore last month, Trump and Kim agreed to the "complete denuclearization" of the Korean Peninsula in exchange for security guarantees from the U.S.

Last weekend Pompeo met with North Korean officials for the first time since the summit in a bid to hammer out details, including a timeline and verification methods for denuclearization.

The top U.S. diplomat said later that the talks were "productive," but also acknowledged that much work remains to be done. North Korea, on the other hand, issued a statement lashing out at the U.S. for making a "unilateral and gangster-like" demand for "complete, verifiable and irreversible" denuclearization.

Trump appeared to be blaming China for North Korea's harsh rhetoric, citing an escalating trade dispute between Washington and Beijing.

On an unannounced visit to Kabul, Afghanistan, Pompeo echoed Trump's confidence in the North Korean leader.

"We still have a long ways to go, but the commitment that the North Koreans made -- frankly, that Chairman Kim personally made to President Trump -- remains, has been reinforced," he told reporters there. "I saw some of the statements (that) came out. They were mixed. You haven't reported on the mixed statements, but maybe you will now. The statements that were put out, Chairman Kim's statement following our discussions, continued to express his desire to complete the denuclearization to which he is so committed." 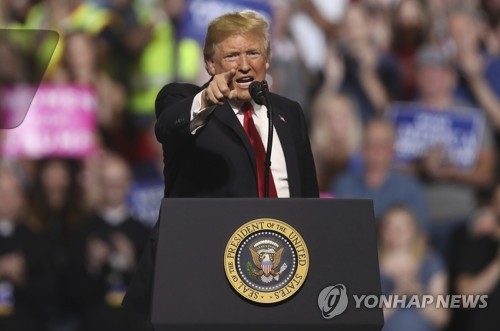