Kim gave a "field guidance" at the sites, including a township construction project under way in Samjiyon County in Ryanggang Province bordering China, according to the Korean Central News Agency.

"He said that the construction of Samjiyon County should be conducted, divided into the areas of education, dwelling houses, modern streets, industry, sports and cultural education, commercial service and tourism, in accordance with the ratified master plan," the KCNA said.

Kim emphasized that the construction project should not lead to the destruction of forests in the region, calling for efforts to "make a good design of forestation and tree planting," it added. 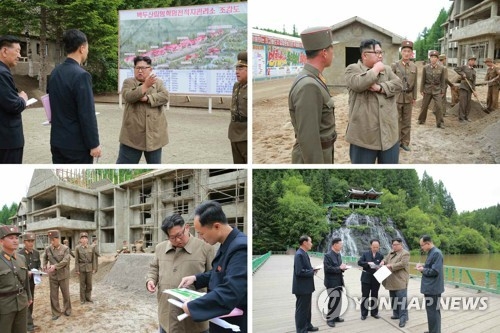 It appears to be in line with the North's emphasis on addressing the deforestation issue, which was also disused during inter-Korean talks last week.

The KCNA also reported that Kim inspected a farm in Samjiyon. He praised workers and country officials for providing role models for other regions.

It was not known when Kim's visit to the region took place. It was the first reported outing by Kim in eight days since July 2, when the North's media said that he toured plants in the northwestern city of Sinuiju.

Kim has not been seen publicly for the past week when major inter-Korean contacts and diplomacy with the U.S. were underway.

South and North Korean basketball players held friendly matches in Pyongyang last week, but Kim did not show as he was said to be out of town inspecting sites.

U.S. Secretary of State Mike Pompeo visited Pyongyang late last week to follow up on the North's pledge to denuclearize. Unlike his previous two trips to the North, Pompeo did not meet leader Kim.

The North's media have not reported yet whether Kim visited the Kumsusan Palace of Sun, the mausoleum of national founder Kim Il-sung, in commemoration of the 24th anniversary of the death of his grandfather that fell on Sunday this year.

Since taking office in late 2011, Kim has visited the mausoleum every year, and the North's media has immediately reported on it.

No report on his visit there this year has led observers and experts to scramble to find plausible reasons and possible ramifications, with some citing such field guidance as a reason.

An official of Seoul's unification ministry, which handles inter-Korean affairs, said that it is currently looking into whether or not Kim paid tribute at the mausoleum in time for the anniversary of the death of his grandfather.