SEOUL, July 11 (Yonhap) -- Forest For Peace, a Seoul-based civic group, is brimming with hopes for the revival of its suspended project to set up a tree nursery at Mount Kumgang on North Korea's east coast.

The Seoul government has picked forestry cooperation as one of its priority projects in implementing the April 27 summit agreement between President Moon Jae-in and North Korean leader Kim Jong-un.

In 2007, the group established a sapling nursery on the North's scenic mountain, the venue of a now-suspended inter-Korean tour project, and planted chestnut trees there the following year. But the project has been suspended for a decade amid chilly inter-Korean ties.

"We are seeking to re-push for the forestry project at Mt. Kumgang. We are also mulling ways to help the North modernize its tree nurseries in the long term," said Lee Jung-min, secretary-general of the group.

"We have high anticipation for the revival of forestry cooperation with the North. But as the government has yet to unveil a detailed action plan, civic groups are studying what they could do," he added. 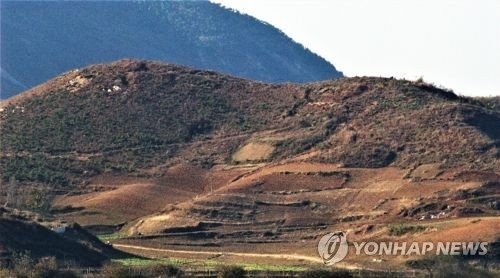 Forest For Peace and other non-governmental organizations (NGOs) are hoping that the current rapprochement will spur forestry cooperation between the two Koreas.

Inter-Korean economic cooperation is heavily strained under tough international sanctions, but forestry is thoguht to be less affected by the sanctions regime, experts say.

Land that is or used to be forested in North Korea is estimated to account for 73 percent of the country's total area. About 32 percent of that remains deforested as of 2008, South Korea's unification ministry said, citing the latest data available.

The North's deforestation accelerated during the so-called Arduous March in the 1990s, when massive starvation occurred amid a severe economic downturn.

The pace of destruction has been slowing in recent years, aided by North Koreans' use of marketplaces, but the problem remains serious, experts said.

"North Korea's deforestation has worsened due to its excessive use of forest resources in the face of economic difficulties and energy shortages," Green Korea, a environmental civic group, said in a recent report.

The report contained findings on North Korean mountains and forests in nine areas located near the Demilitarized Zone (DMZ) that bisects the two Koreas.

Photos showed that bare mountains can be spotted easily north of the DMZ. There are few trees on mountains near a now-shuttered joint industrial complex in the North's border city of Kaesong. 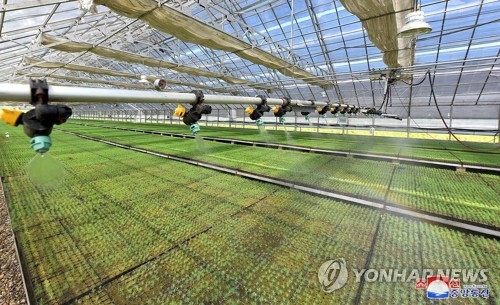 In February 2015, Kim Jong-un told party and military officials that the whole country should turn into "thick woodland and greenery," noting that "bare mountains and earth-covered ones should never be handed to posterity."

In March 2017, Kim Il-sung University, the North's top university, set up a college of forest science. In April 2018, the country began to build an institute in Pyongyang to study forests.

On June 24, the North boasted that it had completed a large-scale sapling nursery in Kangwon Province in the east of the country.

"For South Korea, forestry cooperation can be pursued even under international sanctions. The North has a need to tackle deforestation-led floods. It is an area where the two Koreas' interests converge," said Cheong Seong-chang, a senior research fellow at the Sejong Institute.

In a related move, South Korea plans to set up a tree nursery and a facility to store seeds in its eastern border county of Goseong, 160 kilometers east of Seoul, by next year. It also seeks to plant seedlings in designated border locations in North Korea.

The Koreas held working-level talks on forestry cooperation on Wednesday. They agreed to conduct on-site inspections of border areas in mid-July for pest-control and to cooperate on jointly protecting their forests, for instance by modernizing sapling nurseries.

But despite the South's efforts, local NGOs expressed regret that the government is not cooperating with civic groups on expanding reforestation projects with the North.

"As almost all inter-Korean exchanges are currently being pursued at the state level, NGOs have limited room in seeking forestry cooperation," said Yeom Gyu-hyun, a director at Green One Korea, a Seoul-based civic group.

"Many said forestry projects are possible under the sanctions regime. But in reality, we cannot send materials such as fertilizer or shovels to North Korea due to multi-layered sanctions." 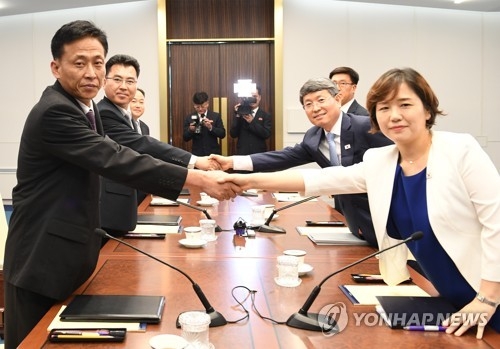 South Korean NGOs' forestry projects with North Korea go back to 2000, when a historic first inter-Korean summit set the stage for an increase in civilian exchanges. But until 2003, forestry cooperation was mainly limited to the supply of materials or holding one-off events.

The second inter-Korean summit in 2007 helped civic groups study more long-term projects for reforestation, but such rapprochement was short-lived as inter-Korean exchanges nearly came to an end under the South's conservative administrations from 2008 to 2017.

Experts said that now is the time for the South to come up with a comprehensive plan for reforestation in North Korea, apart from merely providing assistance.

"A forestry project should be developed by linking the resolution of food and energy shortages. By doing so, we can prod North Koreans into reducing their reliance on forests for their livelihoods," said Park Kyung-seok, a senior researcher at the National Institute of Forest Science.

Lee at Forest For Peace stressed that making North Korea greener would restore an ecosystem that was disrupted by the two Koreas' division.

"Forestation needs a long-term roadmap, probably at least a 50-year plan. I hope that the government will help more civic groups do their part for forestry cooperation," he added.