There has been speculation that the National Pension Service (NPS) may postpone the adoption of the so-called stewardship code for the state pension fund until after August due to a controversial search process for its chief investment officer (CIO) and three vacancies out of the fund's eight key positions in charge of investment.

Despite the pension operator's public search process, the presidential office Cheong Wa Dae is said to have recommended a candidate for the CIO or already nominated its choice.

"As stated several times earlier, the investment management committee of the NPS is slated to hold a meeting on July 26 or 27 to deliberate and decide on a plan to introduce the stewardship code," a senior welfare ministry official said.

The stewardship code refers to a set of principles or guidelines aimed at making institutional investors, who manage other people's money, be active and engage in corporate governance in the interests of their beneficiaries. 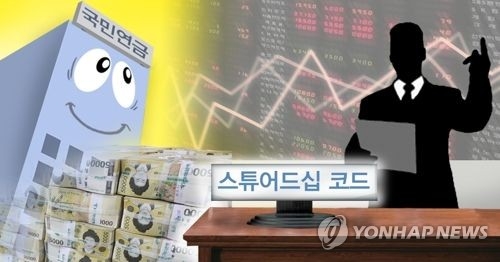 In late June, the ministry announced it will implement the stewardship code in July. Commissioned by the NPS, a Seoul university disclosed a related report in March this year. The ministry and the NPS have been putting their final touches on the specifics of the code since then.

Watchers said the final version may be weaker than the university report, which calls on the NPS to take a more active role, amid concerns that the government may try to influence corporate management by taking advantage of the NPS.

The NPS started to prepare for the introduction of the code in December last year amid intense criticism over its approval of Samsung Group's two flagship units, which came to light following a massive influence-peddling scandal involving a close confidante of ousted President Park Geun-hye.

Improving South Korea's corporate governance through the NPS' introduction of the stewardship code was one of President Moon Jae-in's election promises.

Despite holding large stakes in local firms, the NPS has also been under flak for rubber-stamping key agenda items at shareholders meetings to serve the interests of large shareholders or management rather than small investors.

The NPS has more than 600 trillion won (US$539 billion) under its management, making it one of the three biggest pension operators in the world. South Korea adopted the state pension program in 1988 to guarantee income for the elderly after retirement and to provide coverage for disabilities and surviving family members.
(END)