The issuance of ELS products amounted to 48.09 trillion won (US$43.28 billion), up 5.7 percent from the end of last year, according to the Korea Securities Depository (KSD).

"The surge seems to come as more people flocked to the relatively safer means of investment due to high stock market volatility both at home and abroad," the KSD said in a release.

Equity-linked securities are hybrid debt securities whose return is determined by the performance of underlying equity.

ELS products that track the Euro Stoxx 50 as underlying assets accounted for the largest share with 37.81 trillion won, followed by those linked to the Hang Seng China Enterprises Index and S&P 500, according to the data.

The redemption in the first half tumbled 28.2 percent from the end of 2017 to 39.62 trillion won, as the sluggish stock market prevented some ELS products from meeting the conditions required for the early redemption, the KSD noted.

As of end-June, the outstanding amount of ELS issues amounted to 63.83 trillion won, up 15.7 percent from six months earlier, the data showed. 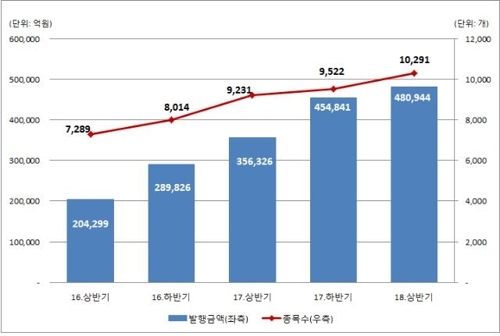