SEOUL, July 10 (Yonhap) -- The floor leaders of ruling and opposition parties reached an agreement on Tuesday on the formation of parliamentary standing committees, putting the idle National Assembly back on the track.

The parties concluded the talks over the formation of the 18 committees for the second half of the 20th National Assembly's four-year term.

The parties started consultations in late June even though the former speaker's two-year term ended in May. Opposition parties have also been grappling with their resounding defeat in the June 13 local elections.

They agreed that the main opposition Liberty Korea Party (LKP) will take the leadership of the Legislation and Judiciary Committee, a key panel for the passage of bills.

Both the ruling Democratic Party (DP) and the LKP had wanted the chairperson of the judiciary committee. Customarily, a major opposition party leads the committee.

Before the agreement, the DP complained about the fact that the committee, headed by the LKP, did not cooperate in approving a set of reform bills sponsored by the government.

The ruling party also raised the need to limit the committee's authority to review and revise the wording of a bill, saying that the panel sometimes overhauled motions in a way to hamper their original intention.

But the LKP said that it should lead the committee to prevent the ruling party from excessively influencing parliament at a time when the DP commands 130 seats in the 300-member National Assembly.

"This is not an issue about which party chairs the committee, but how to make up for the system's shortcomings," Hong Young-pyo, the floor leader of the DP said earlier in the day.

"There is no case in the world that a judiciary committee excessively wields power in the name of changing the wording."

The floor leaders also agreed to allocate the parliamentary leadership and the 18 committees in accordance with practice. The DP will take the speaker and two vice speakers will go to the LKP and the minor opposition Bareunmirae Party (BP), respectively.

The ruling party will chair eight committees, followed by the LKP with seven and the BP with two. One committee will be chaired by a joint floor negotiation bloc of two minor parties. 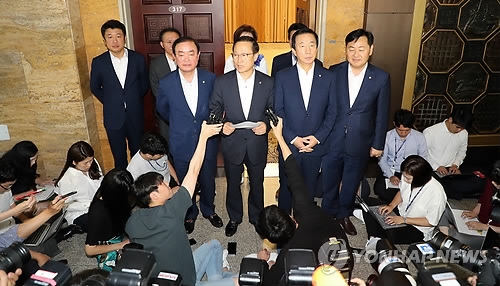