SEOUL, July 10 (Yonhap) -- Ruling and opposition parties on Tuesday struck an agreement over the formation of the parliament's new leadership and its standing committees, ending more than 40 days of legislative void.

After grueling negotiations over who would chair key committees, the floor leaders of the ruling Democratic Party, main opposition Liberty Korea Party (LKP), Bareunmirae Party and the Parliamentary Group for Peace and Justice (PGPJ) announced their deal for the second half of the 20th National Assembly's four-year term.

Under the deal, a member of the ruling party, the largest party in parliament, will become the parliamentary speaker, while the LKP and Bareunmirae Party, the second and third largest parties, will get the vice speaker positions.

The parties will hold a parliamentary plenary session to elect the new Assembly leadership. Earlier, the ruling party picked six-term lawmaker Moon Hee-sang as its candidate for speaker.

Of the 18 standing committees, ruling party members will chair eight, while the LKP, Bareunmirae and PGPJ will lead seven, two and one, respectively.

The parties agreed to form a taskforce to further discuss ways to prevent the legislation committee from wielding excessive legislative authority, a major sticking point during the negotiations over the parliamentary formation.

The parties also agreed to separate the large committee on education, culture, sports and tourism into two separate ones -- one in charge of education and the other the remaining affairs. 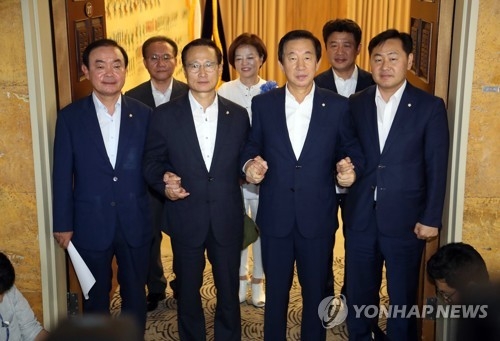