SEOUL, July 10 (Yonhap) -- The ruling Democratic Party (DP) on Tuesday welcomed President Moon Jae-in's order of the launch of a special probe into allegations that the military intelligence unit may have proposed an armed crackdown on candlelight vigils last year.

Moon has ordered Seoul's defense ministry to investigate allegations that the Defense Security Command (DSC) proposed declaring martial law in the midst of the vigils that helped lead to the ouster of former President Park Geun-hye over corruption charges.

The DP hailed the decision, calling for a thorough investigation.

"There should be a swift and thorough probe into the allegations," Back Hye-ryun, a spokeswoman for the DP, said in a statement.

She said an independent investigation team should determine who was behind the move, raising the need to reform the DSC, which has been embroiled in political scandals.

Back also called on the main opposition Liberty Korea Party (LKP) to actively cooperate with parliament's potential probe and hearing about the case. 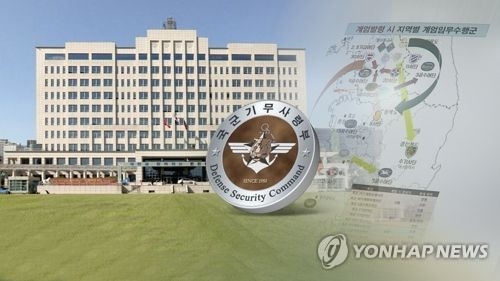 Many South Koreans took to the streets to hold candlelight vigils for six months from October 2016 to protest against Park over a political scandal. The conservative LKP was the ruling party at that time.

Last week, a civic group disclosed what it claimed was a DSC document drawn up in March last year to outline ways to impose wartime martial law in case the Constitutional Court rejected the National Assembly's impeachment of Park and kept her in office.

The LKP said that the document contained potential emergency steps that the military could take to tackle possible security unrest caused by the impeachment of Park.

"Any look at the document revealed that there was no intention for coup through garrison decree or martial law," the party claimed. "An investigation team should not probe the case in a politically charged manner.

Meanwhile, the minor opposition Bareunmirae Party called for a parliamentary hearing on the issue.

"Moon has ordered Defense Minister Song Young-moo to launch the probe, but it appears the probe will fall short of clearing the public's suspicions if only the military investigates," Kim Cheol-kun, the party's spokesman, said. "We propose to the ruling and opposition parties holding a parliamentary hearing to determine the truth."

Earlier in the day, Prime Minister Lee Nak-yon called for a thorough probe into the allegations at a Cabinet meeting.

"(An independent investigation team) should determine whether it is a proper idea to consider sending troops to crack down on peaceful candlelight vigils or the DSC has an authority to review that proposal or write relevant documents," Lee said.

"An overhaul that prevents the repeat of such acts has become all the more necessary," he said. "The Ministry of National Defense needs to complete the reform of the DSC."