NEW DELHI, July 10 (Yonhap) -- The leaders of South Korea and India agreed Tuesday to more than double the countries' bilateral trade to over US$50 billion in 2030, also pledging joint efforts further upgrade their diplomatic relationship.

"At today's summit, we agreed that now is the best time to practically implement the South Korea-India special strategic partnership and to further upgrade the partnership to the next level," Moon told a joint press conference with Modi after their bilateral summit.

Moon arrived here on Sunday for a four-day state visit. The Moon-Modi summit came one day after the leaders met for a series of events aimed at promoting their personal ties and friendship.

The leaders first visited the National Gandhi Museum in New Delhi before taking a rare joint excursion to a newly built smartphone factory of Samsung Electronics Co. in Noida. 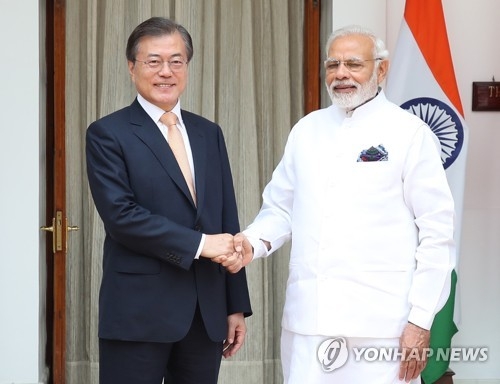 "Today, Prime Minister Modi and I agreed to boost our cooperation for people, prosperity and peace and actively push for cooperation on a "3P Plus" policy that seeks to create future growth engines in preparation for the fourth industrial revolution," Moon told the joint press conference.

To this end, the countries will work to increase exchanges, including visits by their leaders, while also seeking to expand their economic cooperation.

"Based on the result of such cooperation, we, the leaders, agreed to greatly expand trade between the two countries to $50 billion by 2030 from the current $20 billion," the South Korean president said.

The joint press conference also followed a signing ceremony, in which the countries signed a memorandum of understanding on cooperation for an early conclusion of their negotiations to improve their free trade agreement, known as the Comprehensive Economic Partnership Agreement (CEPA).

"(We) welcomed the fresh negotiations on the South Korea-India Comprehensive Economic Partnership Agreement and agreed to work together for an early conclusion of the negotiations," Moon said.

The South Korea-India CEPA went into effect at the start of 2010. The countries have so far held five rounds of negotiations aimed at further liberalizing their markets under the bilateral free trade pact.

Moon and Modi also agreed to step up their joint efforts to establish peace in the Korean Peninsula and the region.

"Furthermore, we agreed to strengthen our cooperation at regional multilateral forums, such as the East Asia Summit and the ASEAN Regional Forum, to ensure peace and stability in the region," he added.

Moon invited Modi to visit his country in 2020.

"I wish my state visit to India this time will open a new era of strategic cooperation between our two countries. Regular consultations between the leaders of the two countries may be the start," he said.

"I look forward to Prime Minister Modi's visit to South Korea in 2020, and wish to continue our close communication until then online and at regional summit meetings." 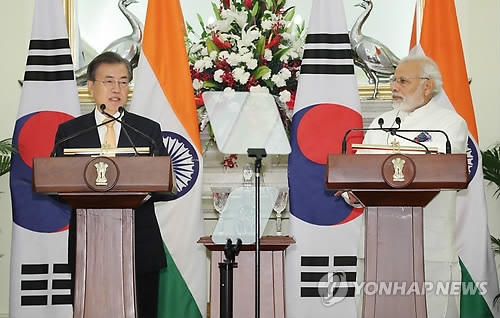 In a joint statement issued at the end of their summit, the leaders said they have agreed to promote leadership-level exchanges between the countries, including visits by their leaders to each other every other year.

"Recognizing the importance of regular high-level exchanges to consolidate progress in the bilateral partnership, we agreed to intensify leadership-level contact, including through biennial visits by the leaders of the two countries. We agreed to expand interaction by regularizing existing dialogue mechanisms as well as by exploring other areas of mutual interest and cooperation," according to the 17-point statement released by Seoul's presidential office Cheong Wa Dae.

Both Moon and Modi were expected to attend a state dinner to be hosted by Indian President Ram Nath Kovind.

Moon will leave India early Wednesday to head for Singapore, the last leg of his two-nation tour that will end Friday.