SEOUL, July 10 (Yonhap) -- New U.S. Ambassador to South Korea Harry Harris on Tuesday formally started his stint here as he presented a copy of his credentials to the Ministry of Foreign Affairs.

He delivered the document to Vice Foreign Minister Lim Sung-nam and exchanged views on ways to strengthen the alliance and on North Korea, the ministry said.

The retired admiral, who served as commander of American forces in the Asia-Pacific region, has filled the post that had been vacant since January last year.

He landed in South Korea over the weekend and began his official activity with a meeting with the vice minister because President Moon Jae-in and Foreign Minister Kang Kyung-wha are on an overseas trip. 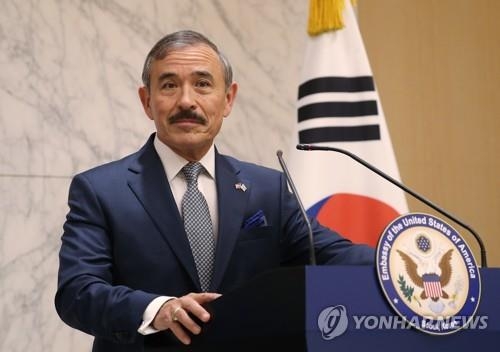 In a statement issued upon his arrival, Harris stressed the significance of the alliance.

"Over the past 65 years, the U.S.-ROK alliance has served as a pillar of strength and stability throughout the Indo-Pacific region and beyond. America could not ask for a better friend, partner and ally than the ROK," he said, using the acronym for South Korea's official name, the Republic of Korea.