"President Moon listened to the difficulties that may face companies when doing business and encouraged the business people of the two countries who are working hard despite many difficult conditions in the global economy," Moon's presidential office Cheong Wa Dae said in a press release.

In their bilateral summit, Moon and Modi vowed efforts to more than double their countries' bilateral trade from the current US$20 billion to $50 billion in 2030.

To this end, the leaders called for an early conclusion of ongoing negotiations to upgrade the countries' bilateral free trade agreement, known as the Comprehensive Economic Partnership Agreement. 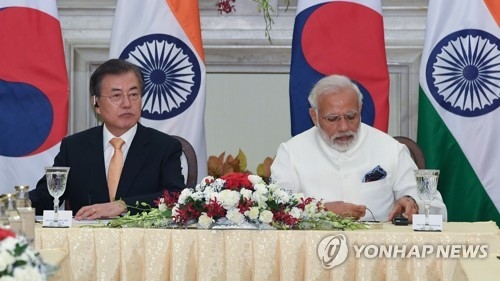 Tuesday's meeting involved the CEOs of 12 top companies each from the two countries, including South Korea's Hyundai Motor Group and Samsung Electronics Co.

The Hyundai Motor official said the company has become the second-largest automaker and auto exporter in India since its first local plant was built in 1996. The company executive asked the leaders to help lower import and export tariffs on automobile parts so the company may actively push for the development of new clean energy vehicles, such as electric and fuel-cell cars, Cheong Wa Dae said.

Samsung Electronics, which just opened its new mobile phone factory in India, said it planned to continue increasing its investment in India to turn the country into its global manufacturing center.

The new Samsung factory in Noida, India, was inaugurated Monday in a ceremony attended by both Moon and Modi. The Indian prime minister said the ceremony marked a special day, in which his country became a global manufacturing hub.

The Noida plant is said to have an annual production capacity of 120 million smartphones, making it one of the world's largest mobile phone factories.

Indian companies present at the meeting asked the leaders to support their businesses and joint projects in South Korea, Cheong Wa Dae said.

They included Mahindra Group, which has a controlling stake in South Korean automaker Ssangyong Motor Co.

While speaking briefly with the chief executive officer of Mahindra, the South Korean president asked if the company faced any difficulties doing business in South Korea.

Moon then asked Anand Mahindra to pay more attention to the difficulties of former Ssangyong employees who were laid off before Mahindra took over the South Korean carmaker and are currently asking to be reinstated.

Mahindra said he believed his company officials in South Korea will resolve the issue fairly, according to Cheong Wa Dae pool reports. The chief of Mahindra Group also said his company planned to invest 1.3 trillion won (US$1.16 billion) in Ssangyong over the next 3-4 years, in addition to the 1.4 trillion won it has already invested, according to Yoon Young-chan, chief press secretary to President Moon.

Mahindra took over Ssangyong in 2011 when the company was under court receivership.

"Chairman Mahindra said the company has now become very strong while its sales also jumped more than three-fold over the past seven years," Yoon told a press briefing.

"The chairman said the reason Ssangyong could overcome its crisis and grow was the support of its labor union and that the company will continue its efforts to ensure sustainable growth," the Cheong Wa Dae official added.