Lee Kee-heung, who leads the South's Korean Olympic & Sport Committee (KSOC), said that the two Koreas recently sent a request to the Olympic Council of Asia for the use of a flag showing Dokdo when their joint team appears at the 18th Asian Games in Jakarta.

"Both sides want to show Dokdo on the unification Korean flag, but the OCA wants to follow what the International Olympic Committee (IOC) did at the PyeongChang Olympics," Lee said during a press conference at the National Training Center in Jincheon, North Chungcheong Province. "We said that OCA's decision can be also interpreted as political interference, and since Dokdo is our territory, we wanted to show Dokdo on the flag."

For the PyeongChang Winter Olympics, the South and the North had a joint parade at the opening ceremony under a unified Korean flag without Dokdo following the IOC's recommendation not to politicize sports events. 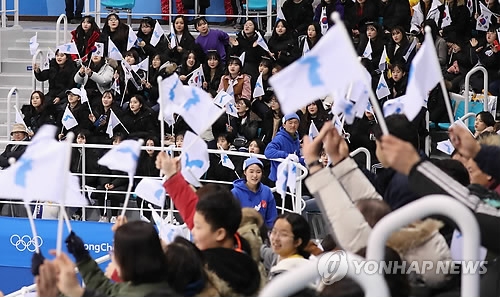 Dokdo, called Takeshima in Japan, consists of a set of rocky islets lying close to the Korean Peninsula in the East Sea. It has long been a recurring source of tension between South Korea and Japan.

South Korea has kept a small police detachment on Dokdo since the liberation of the Korean Peninsula from Japan in 1945 and has made clear that Tokyo's claims are groundless.

For the Jakarta-Palembang Asian Games, the Korea will compete as one in three sports -- basketball, dragon boat racing and rowing. The OCA made the announcement following a four-party meeting it hosted involving the two Koreas' respective Olympic bodies and the organizing committee of the Asian Games in Jakarta last month.

North Korea will send 26 athletes to form a joint team with South Koreans.

Lee said the two Koreas are also planning to operate a "Team Korea House" together during the Asian Games. It is known as a leisure place for athletes and a promotion center for Korean culture during the Games.

"We hope that we can provide North Korea's Pyongyang cold noodles to visitors," he said. "We're currently discussing details with North Koreans, including the location of the house." 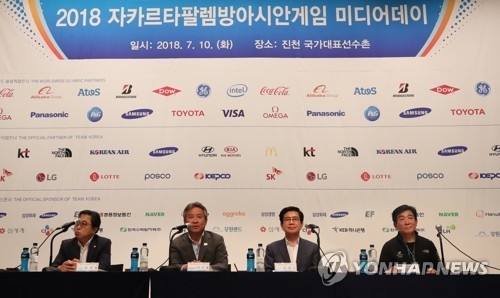 Lee said the Koreas are working together closely to boost their competitiveness in joint teams. The two sides last week held a friendly basketball event in Pyongyang with both the men's and the women's teams making a trip.

Lee said there will be various sports exchanges between the two Koreas this year after tension on the peninsula eased following the PyeongChang Olympics in February and the South-North summit in April.

"On July 15, we'll see North Korean table tennis players coming to South Korea for the Korean Open table tennis tournament to open in Daejeon, and for next month, North Koreans will compete at the world shooting championships to be held in Changwon, South Gyeongsang Province," he said. "In October, North Korean basketball players will come down to the South, and also in August, I believe football teams will also visit here. So for this year, we have plenty of sports events with North Korea."

Koreas want to use flag showing Dokdo during 2018 Asian Games

Koreas want to use flag showing Dokdo during 2018 Asian Games