Moon arrived in the island nation Wednesday following his four-day state visit to New Delhi. He is currently making a three-day state visit to Singapore, the first of its kind by a South Korean president in 15 years, according to his office Cheong Wa Dae. 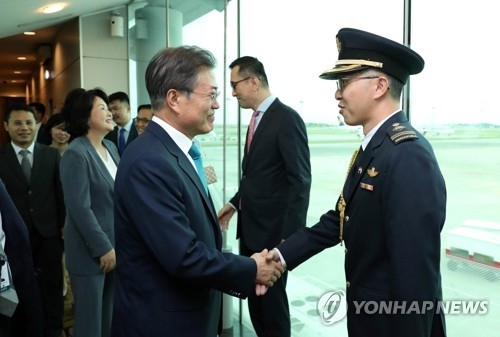 Moon's trip here also comes as part of efforts to improve Seoul's economic and diplomatic ties with Singapore and other members of the Association of Southeast Asian Nations (ASEAN) under the Moon Jae-in administration's New Southern Policy.

Singapore is currently serving as the chair of the 10-member ASEAN.

"We expect the trip to be an important opportunity to strengthen friendship and trust between the leaders and to create a basis for the development of our country's complementary and mutually beneficial cooperation with India and Singapore," a Cheong Wa Dae official said earlier.

Moon's state visit here will begin with an official welcoming ceremony, followed by his meeting with Singaporean President Halimah Yacob.

The Moon-Lee summit will be held later, followed by a joint press conference by the leaders to announce the outcome of their meeting.

The South Korean president will then attend a lunch to be hosted by Lee before attending a South Korea-Singapore business forum.