SEOUL, July 10 (Yonhap) -- The U.N. special rapporteur on human rights in North Korea called Tuesday for a through and independent investigation into the controversial defection of a dozen North Korean restaurant workers to South Korea in 2016, saying at least some of them appear to be "victims" of a scam.

"There's a need to respect their rights as victims," Tomas Ojea Quintana said in a press conference in Seoul. "When I say victims, I am implying that they were subject to some kind of deceit in regard to where they were going." 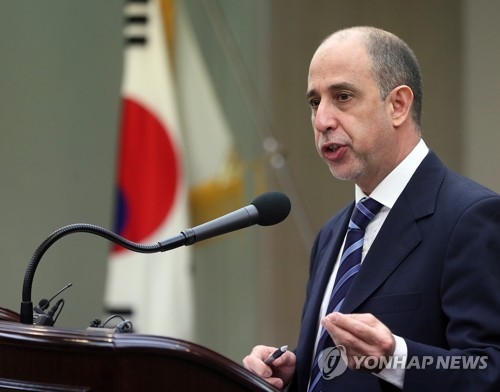 He interviewed some of the North Koreans, now staying in the South, as he was not given access to all of them during his fourth visit here since assuming the U.N. mission in 2016.

Twelve North Korean women had worked at a North Korean-run restaurant in China before coming to the South, along with a manager, in April 2016.

At issue is whether they wanted to defect to the South.

The South's authorities under the previous Park Geun-hye administration touted it as a massive defection case, while North Korea claimed that they were abducted against their will in a dirty scheme.

If that's the case, Quintana said it might be considered a "crime" and that it's the duty of the South's government to take relevant law enforcement steps as early as possible.

Some South Korean media also raised suspicions over how they left China and reached the South.

Quintana stressed what matters is the intention of each individual.

"In regards to those who talked to me, it's clear that there were some shortcomings in regards to how they were brought to South Korea," he said. "Again, we need to respect their rights on what to do."

He would not provide other details, including the exact number of interviewees and specifics of their testimonies.

He said the South Korean government should conduct a "thorough and independent" probe into the incident and hold accountable those who are responsible.

He welcomed the overall peace mood on the peninsula amid denuclearization talks between the U.S. and the North but expressed regret that the human rights problem is being sidelined

"Neither the Panmunjom Declaration, nor the DPRK-U.S. statement includes an explicit use of the human rights terminology," he said, referring to the April 27 inter-Korean summit agreement and an official document issued after the Singapore talks between President Donald Trump and the North's leader Kim Jong-un on June 12.

He stressed that the human rights issue should be handled in efforts for a peace regime, citing history lessons.

"History has shown time and again that whenever there is a conflict, there is a need to address the root causes, it will pose risks for the future," he said. "This is not the first time that human rights is seen as an inconvenience at a delicate moment."

There can be no "genuine, peaceful and sustainable transition" without resolving the human rights issue, he added.

As a U.N. rapporteur, he said, "The main objective of my visit this time is to reinvigorate the human rights agenda in the ongoing dialogue with the North."

Meanwhile, he recounted various U.N. agencies' data on a "protracted humanitarian crisis" in the poverty-stricken communist country, accusing the international community of overlooking it.

More than 10 million people, or 40 percent of the population, are said to require humanitarian assistance, he pointed out, amid reports that the total food production in the nation has seen a decrease of 7.43 percent in 2018 compared to last year.

He was wrapping up a weeklong visit to South Korea aimed at collecting information for a regular report to the U.N. General Assembly.