SEOUL, July 10 (Yonhap) -- South Korea's government has been asked by education officials worldwide to pay greater attention to foreign learners of Korean, as the number of students learning the language outside the Korean Peninsula has exceeded 125,000.

Government data released at an international symposium on Korean language education on Tuesday showed that more than 125,000 students were learning the Korean language at 1,423 schools in 28 countries as of last year.

Education officials from 31 countries, including Russia, Mongolia and Australia, attended the symposium and exchanged views with South Korean educators and officials about ways to help foreign learners of Korean utilize their language ability after school graduation. They also called for policy measures to widen the usage of Korean. 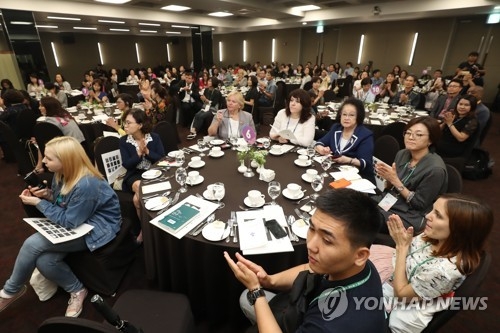 The symposium was held in Seoul in time for the 20th anniversary of South Korea's launch of a state project to support overseas learners of Korean.

Under the project, Seoul has built infrastructure and human networks to lead more elementary and secondary schools in foreign countries to adopt Korean as a foreign language or elective.

Babu Ram Gautam, an official at Nepal's education ministry, stressed that foreign students learning Korean should be given opportunities to utilize their language ability in charting their careers after graduation.

Expansion of global demand for Korean language speakers should be another policy goal, the official said.

A Thai official noted that Korean was included among foreign languages in Thailand's college entrance exam conducted in February this year.

The official said Thailand will continue to cooperate with South Korea to train educators of the Korean language in the Southeast Asian country.