NEW DELHI, July 11 (Yonhap) -- South Korean President Moon Jae-in arrived in Singapore on Wednesday for a three-day state visit that will include a meeting with his Singaporean counterpart and a summit with Prime Minister Lee Hsien Loong. 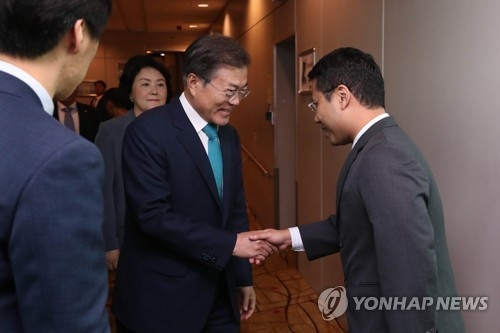 Moon's state visit will begin with an official welcoming ceremony Thursday, followed by a meeting with his Singaporean counterpart, Halimah Yacob.

The Moon-Lee summit will be held later in the day followed by a joint press conference and a state dinner.

Singapore is currently serving as the chair of the 10-member Association of Southeast Asian Nations (ASEAN).

The Moon Jae-in administration is actively seeking to upgrade its ties with India and the 10 ASEAN member countries under its new foreign policy, known as the New Southern Policy.

While in India, the South Korean leader sought to promote co-prosperity and peace in the region.

Moon is again expected to stress regional efforts to ensure peace and prosperity while meeting with Singaporean leaders.

The South Korean president is scheduled to deliver a special lecture Friday on his government's efforts to peacefully denuclearize the Korean Peninsula and establish lasting peace, Cheong Wa Dae has said.