Although it remains unclear how and when North Korea might denuclearize, some analysts say Kim might have decided to suspend the North's nuclear program in a bid to develop Pyongyang's moribund economy to ensure his regime's long-term survival. 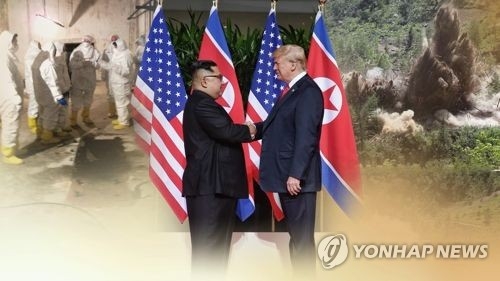 Yoo Kwang-yeol, first senior deputy governor of the Financial Supervisory Service (FSS), told investors in Hong Kong that, "Many efforts have been made to establish permanent peace on the Korean Peninsula and terminate the diplomatic and economic isolation of North Korea."

"Thanks to the efforts, the 'Korea Discount' led by geopolitical risks could change into a 'Korea Premium' that will provide bigger opportunity and a brighter future," Yoo said, according to a statement provided by the FSS.

"If North Korea opens its market, infrastructure investment will increase in the short run and in the Northeast Asian economic bloc and more business opportunities in Eurasia will be created in the long run," Yoo said.

On Monday, Trump said he has "confidence" that Kim will live up to his denuclearization pledge.

"I have confidence that Kim Jong Un will honor the contract we signed &, even more importantly, our handshake," Trump tweeted.