The 18th Asian Games will open in the two co-host cities of Jakarta and Palembang in Indonesia on Aug. 18 and wrap up on Sept. 2. Some 10,000 athletes and officials from 45 nations are expected to participate in the quadrennial event that has medals in 463 events in 40 sports up for grabs.

South Korea will send 779 athletes in 39 of 40 sports, the lone exception being bridge, for the Jakarta-Palembang Asian Games.

South Korea aims to finish second for the sixth consecutive event behind China and above Japan, with at least 65 gold, 71 silver and 72 bronze.

"I looked at athletes' goals and resolutions, and they say things like 'I'll fight with a do-or-die mantra' and 'Will never give up,'" said South Korea's chef de mission Kim Sung-jo at a media event at the National Training Center in Jincheon, North Chungcheong Province. "I hope their resolutions remain until the end of the Asian Games and keep our team united."

With China topping the medal race since 1982, routinely winning 100 or more gold medals, South Korea and Japan are expected to go head-to-head for second place once again. 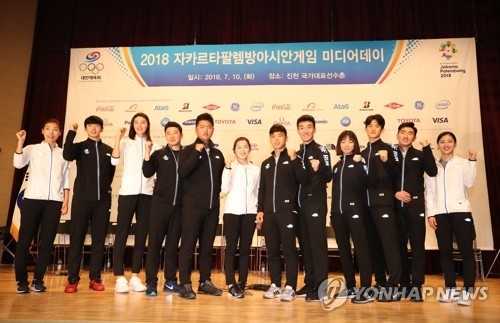 Japan has sent second-tier athletes to some recent Asian Games, and its top stars have often skipped the continental event if world championships or other international events coincided with the Asian event. But this time, South Korea believes Japan will change course and have its best athletes participating in Jakarta-Palembang 2018 so that they can use the Asian Games as a stepping stone for the 2020 Summer Olympics on home soil.

Among sports, South Korea looks to win nine gold medals in its traditional martial arts taekwondo. The country will send 18 taekwondo practitioners, including eight athletes who compete in "poomsae."

"It will be my third Asian Games, but my goal is clear," said Lee Dae-hoon, who won gold medals in the last two Asian Games in the men's 63-kilogram event. "I don't think I'm the obvious winner. I'll do my best."

South Korean archers said they'll repeat the same feat that they achieved at the 2016 Rio de Janeiro Olympics. In Brazil, South Korea swept the four gold medals up for grabs. For the 18th Asian Games, there will be five gold medals in archery, with the addition of the mixed event.

"We won all archery events in Rio, and for these Asian Games, we'll be united to collect the same result," said Kim Woo-jin, a double gold medalist at the 2010 Guangzhou Asian Games and an Olympic champion. "Asians are good in archery, so it's not going to be easy. Our rivals are Japan, Taiwan and China."

South Korean Olympics gold medalists said Asian Games titles are also important. Pistol shooter Jin Jong-oh, who won four gold in the last three Olympics, said he is ready to give his best in what could be his last Asian Games. 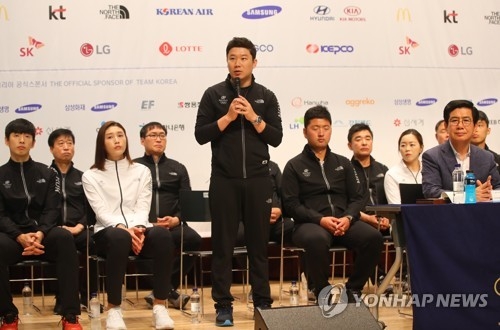 Jin, 38, has three Asiad gold, but all of them are from the team events. For the Jakarta-Palembang Asian Games, he'll only compete in the men's 10-meter air pistol as his main event -- the 50-meter pistol -- was excluded.

"I think this will be my last Asian Games, because four years later I'll be in my 40s," he said. "I do have pressure that I only have one opportunity to win the gold, but that also means I can solely focus on one event."

Epee fencer Park Sang-young, who claimed a surprise gold at the Rio Olympics, said he'll go for an individual Asiad gold. He won the team gold in epee at the 2014 Asian Games in Incheon.

"This is my first time competing in an individual event, so I feel more responsible," he said. "I didn't have a good performance last year because I had some pressure, but after psychological treatment and giving up my greediness, I think I was able to get back in good form."

South Korean coaches said beating Japan will be key to their success.

"We have completed our generation change within the team, so has Japan," said Keum Ho-yeon, the South Korean men's judo national team head coach. "Excluding the 60-kilogram event, we are two big horses, along with Japan. We aim to claim at least two gold medals."

South Korea men's table tennis head coach Kim Taek-soo admitted that it's difficult to produce gold in table tennis, but his players are determined to stand on the top of the podium.

"China and Japan have top-class level, and we know we're behind in the world rankings," he said. "I personally don't want to lose to Japan. I did win a gold medal when I was a player, but this time, I really want to win as a coach." 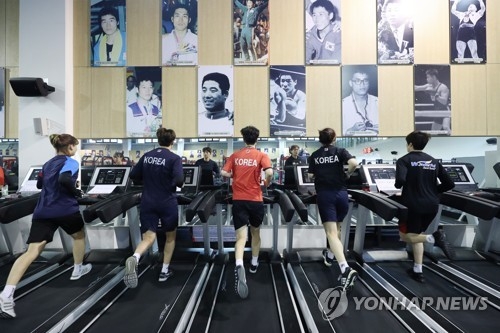 S. Korean athletes gear up for 2018 Asian Games with aim for gold

S. Korean athletes gear up for 2018 Asian Games with aim for gold