JINCHEON, South Korea, July 10 (Yonhap) -- South Korea women's basketball players said Tuesday that smooth communication with North Koreans will be key to their success at the upcoming Asian Games as they will compete under one flag.

South and North Korea will have a joint women's basketball team at the 2018 Asian Games in Indonesia as previously agreed. The two Koreas will also field unified teams in canoeing and rowing.

The Koreas had an opportunity to check their teamwork and players ahead of the Jakarta-Palembang Asian Games when the two sides held a friendly basketball event in Pyongyang last week. On the first day of the event, the South and the North combined to form two teams -- named "Team Peace" and "Team Prosperity" -- and competed in front of Pyongyang spectators.

After playing with North Koreans, Lim Yung-hui said the players need to improve their communication with each other by understanding each other's basketball jargon.

South Korea uses basketball terms that are the same as English, such as pass and rebound, but North Korea has its own Korean-language terms for each maneuver.

"Basketball is a sport in which communication between the players is really important," South Korean women's basketball team captain Lim Young-hee said during a media event at the National Training Center in Jincheon, North Chungcheong Province. "If North Koreans join the team, we'll need some time to facilitate our communication on the court."

South Korea guard Park Hye-jin said that, if they have to unify basketball terms, North Koreans will have to understand English basketball vocabulary since that meets the international standard.

"A North Korean referee called a traveling violation, but I couldn't understand what he said," Park said. "I also had trouble understanding their terms and even hand signals."

Park said some North Koreans appear to have big interest in the Asian Games, and South Korean players will be willing to get along with them.

"It looks like they want to come to the South in September (for another inter-Korean friendly)," she said. "I know we'll be living with them during the Asian Games, but I see no problem."

According to the Korean Sport & Olympic Committee (KSOC), the North will send three players and one official to form the unified women's basketball team with the South. 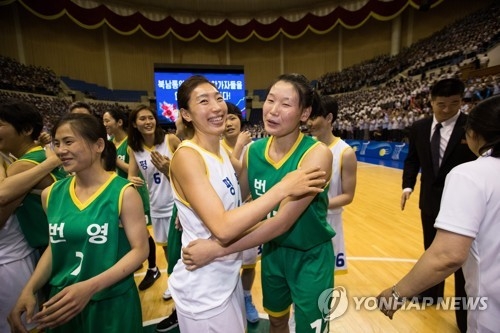 "Through the friendly basketball event in Pyongyang, we now have an understanding of North Korean players," the South's women's basketball team coach Ha Sook-rye said. "There are players who really have good skills. It will be a big help for us to build up our teamwork if we can have the North's players join the team quickly."

Ha, who also has the experience of playing with North Koreans in 1990, said the South's staff is ready to make the joint team competitive at the Asian Games and win a medal.

"Our players might have better individual skills, but you have to combine players to make a team," she said. "We'll boost our teamwork and will try to defend our title from the Incheon Asian Games."