SEOUL, July 10 (Yonhap) -- State prosecutors on Tuesday unveiled a former Samsung executive's confession that the company paid U.S. litigation fees for a firm linked to former President Lee Myung-bak, hoping for a presidential pardon for its chief convicted on tax evasion in return.

State prosecutors revealed a sworn statement by Lee Hak-soo, a former second-in-command at South Korea's top conglomerate, in a corruption trial of the disgraced president.

Lee, who was president from 2008-2013, stands accused of accepting a payment from Samsung of US$5.85 million to cover legal expenses for a suit filed in the U.S. by his brother's auto parts company seeking to recoup losses from investment, among other charges.

Prosecutors had been investigating Samsung over the suspected bribery as the scandal evolved early this year. Lee, former head of Samsung's now-disbanded control tower, returned from overseas as he became a subject in the probe and later submitted the written statement to the prosecution. He has pleaded guilty.

The statement is deemed evidence detrimental to the ex-leader, who has denied all charges, as it backs up prosecution's argument that the money was a bribe from Samsung intended to win a favor for group patriarch Lee Kun-hee.

The Samsung chief received a suspended prison term for tax evasion and breach of trust in August 2009. He was granted a pardon and reinstated by the president four months later in a move that stirred huge public outcry over fairness.

The presidential office Cheong Wa Dae had said that the decision was made for "the sake of national interest," as Chairman Lee's hands in the International Olympic Committee (IOC) are vital to winning the bid for the Winter Olympics, an achievement now touted by the Lee administration.

According to Lee's statement, Kim Seok-han, an attorney from law firm Akin Gump, came to meet Lee between late 2008 and 2009 and suggested Samsung foot the bill for the president. Kim told him it would be "a good turn for the country and Cheong Wa Dae will appreciate (it)."

"I do not deny that Samsung hoped it would help the company in various ways if we paid the bills on the president's behalf," Lee wrote. "I believe that Cheong Wa Dae certainly knew about us making such efforts to make it happen."

"At the time I was convinced it was best for the company and chairman, which now I think was a misjudgment on my part." 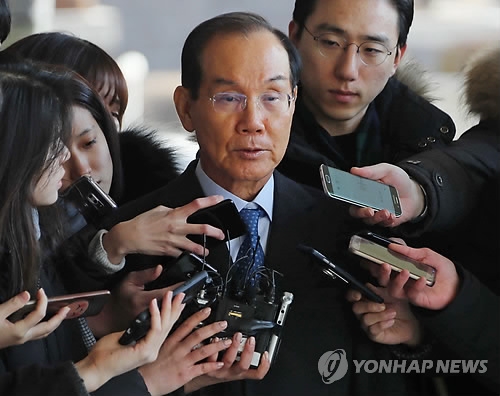