The two nations implemented the Comprehensive Economic Partnership Agreement (CEPA) in January 2010 and have held six round of talks to push for further market opening.

South Korean trade minister Kim Hyun-chong signed a joint statement with India's Minister of Commerce and Industry, Suresh Prabhu in New Delhi, which calls for lower barriers in the goods and service sector, as well as the country of origin. 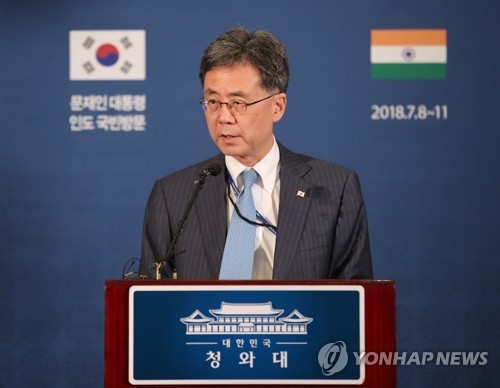 "In light of the agreement, the two nations are expected to put up a joint front against the rising protectionism in global trade and cement their strategic partnership," the ministry said in a release. "It is expected to help expand bilateral trade and investment, which have recently been on the rise."

In the goods sector, India agreed to open petrochemical and coffee products, and South Korea promised market access for agriculture and fishery products, mangoes and castor oil in the upcoming negotiations. The two nations will also ease requirements for sports and cultural visas and ease the rules of origin for some products, the ministry said.

During their meeting, the ministers also signed a memorandum of understanding for trade remedies to address concerns over rising import restrictions.

India currently imposes 30 import restrictions on Korean goods, including petrochemical and steel products, the second largest number after the United States, according the ministry.

Seoul has explored ways to expanded trade relations with India and Southeast Asian nations under President Moon Jae-in's "New Southern Policy," which is aimed at diversifying its export market beyond China and the U.S.