ULSAN, South Korea, July 10 (Yonhap) -- The labor union of Hyundai Motor Co. will stage a partial strike this week amid a deadlock over wage negotiations with its management, union officials said Tuesday.

The unionized workers will down their tools on Thursday, some for two hours and others for four hours. It would be the seventh consecutive year they have gone on strike over wage issues if they press ahead with the walkout plan.

Separately, the company's union members plan to stage another partial strike on Friday in line with a general strike to be conducted by the metal workers' union, a bigger group that they belong to.

On July 2, Hyundai Motor's union conducted a poll in which 65.62 percent of its members supported the strike plan.

The company's labor and management started wage negotiations on May 3, but they have yet to make any significant progress.

Apart from a wage hike, the union's demands include the reinstatement of some dismissed workers and the unconditional application of a retirement age of 60. 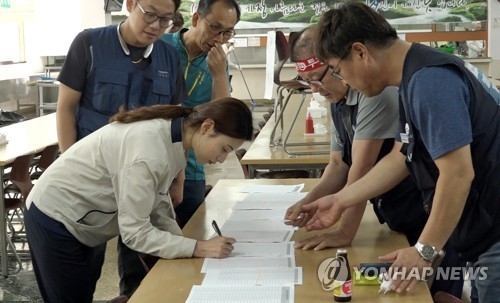