The unemployment rate stood at 3.7 percent last month, down 0.1 percentage point from a year earlier, according to the report compiled by Statistics Korea.

The unemployment rate for young adults -- those aged between 15 and 29 -- was 9 percent, down 1.4 percentage points from the previous year.

The employment rate stood at 67 percent in June, unchanged from a year earlier, with the corresponding figure for young people at 42.9 percent, up 0.2 percentage point over the cited period.

The number of newly added jobs has stayed slightly above 100,000 per month over the past five months. The manufacturing sector shed 120,000 jobs last month, marking a decline for a third straight month. The education service sector also saw its employment drop to 107,000 last month.

"The number of fresh posts in the manufacturing and the educational service sectors lost ground in the wake of corporate restructuring, and the overall job offerings remained sluggish," an official at the agency said.

Since May, the government has been implementing a 3.9 trillion-won (US$3.69 billion) extra budget largely to create jobs for young people amid deepening concerns about high unemployment, which the government warned would have catastrophic consequences.

The extra budget is the second of its kind under the Moon administration. Last year, the government got parliament to approve an 11 trillion-won supplementary budget that focused on creating high quality jobs. 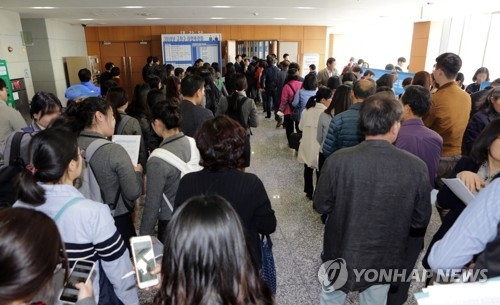