SEOUL, July 11 (Yonhap) -- Shares in SsangYong Motor Co. jumped 14 percent on the local bourse Wednesday as its parent firm's chairman mentioned a new investment plan for the carmaker during his meeting with South Korean President Moon Jae-in in India.

Mahindra Group Chairman Anand Mahindra said a total of 1.3 trillion won (US$1.2 billion) will be invested in SsangYong Motor within the next three to four years when he met with President Moon during a meeting between Korean and Indian business leaders.

SsangYong Motor has invested 1.4 trillion won since 2011 to develop new models such as the Tivoli, G4 Rexton and Rexton Sports sport utility vehicles.

Moon asked the Mahindra chairman to take care of the issue of reinstating former SsangYong Motor workers who were dismissed as part of the company's restructuring programs in 2009.

The chairman said the issue will be resolved by SsangYong Motor's management in Seoul.

In 2009, 160 workers were sacked and some 1,900 employees left the company under a voluntary retirement program.

In 2015, the company and its labor union agreed on the reinstatement of those dismissed depending on demand. But the company has rehired only 45 of the sacked workers since 2015, citing an unfriendly business environment.

SsangYong Motor posted sales of 66,948 vehicles in the January-June period, down 4.8 percent from 70,345 units a year earlier due to lower demand for its models such as the Tivoli, G4 Rexton and Rexton Sport SUVs. 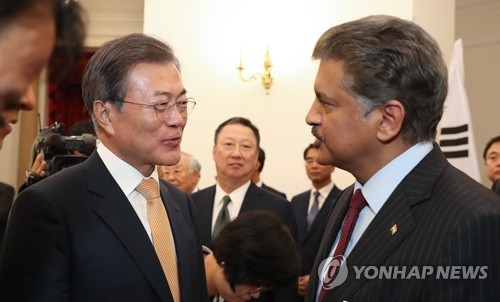