SEOUL, July 11 (Yonhap) -- South Korea's military will install solar panels at its bases to draw more of its power from renewable sources, the government said Wednesday.

The Ministry of Trade, Industry and Energy and the Ministry of National Defense signed a memorandum of understanding with the state-run Korea Electric Power Corp. (KEPCO) to expand use of renewable energy in the military by setting up solar panels at its barracks and other facilities.

Out of 2.44 megawatt hours (MW) of the annual electricity consumption, the military aims to increase the proportion of renewable sources to 25 percent by 2030, which is higher than the government's goal for the country as a whole.

KEPCO will work together with military personnel to install 137 MW photovoltaic panels in bases and set up 320 MW panels in military land and rooftops of other installations, while using geothermal cooling and heating system for some barracks, the energy ministry said.

The government said the military renewable energy project is expected to save energy costs and enhance security against the threat of grid outages from extreme weather or cyberattacks.

The Moon Jae-in administration has vowed to shift the focus from coal and nuclear power to renewable energy, setting a goal of increasing the portion of renewable sources from the current 7 percent to 20 percent by 2030. 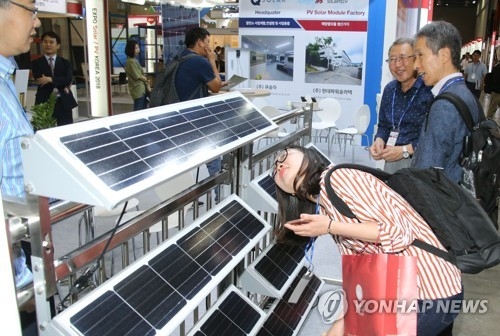