SEOUL, July 11 (Yonhap) -- The Supreme Court said Wednesday it has allowed a man detained for refusing the mandatory military service for religious beliefs to walk free on bail, the first such case following the latest Constitutional Court ruling that partially upheld the right to object to the mandate.

The court granted the bail last Friday for the 23-year-old defendant, identified by his surname Kim, it said in a statement. Kim was being held pending an appellate decision on the charge of disobeying the state order to serve around two years in the military, applied to all able-bodied South Korean men.

He was sentenced to 18 months in jail by a lower court.

Kim's release marks the first decision by the Supreme Court seen as a step in line with the Constitutional Court's June 28 ruling that recognized for the first time the need for alternative service for conscientious objectors.

The highest court reaffirmed its previous three rulings that it is not against the Constitution to convict those who refuse mandatory military service.

But for the first time, it acknowledged that the state does not have the right to deprive a man, who has valid reasons for the refusal, of his right to a choice for substitutes. The latest decision requires the South Korean government to create legislation on the alternatives by the end of next year.

Eyes are now on whether the top court will divert its stance in rulings on the highly disputed issue. The Supreme Court is set to hold a public hearing on the case in late August before they make a full-bench decision.

While lower courts have cleared many conscientious objectors of their charges, the Supreme Court always overturned the rulings and found them guilty. 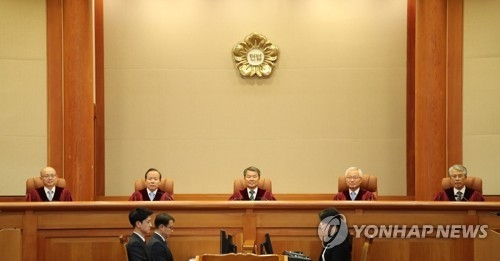