A total of 50,013 cases of such fraudulent cases took place in 2017, up 8.9 percent from the previous year, according to the Financial Supervisory Service (FSS).

The total amount of damages incurred by the financial schemes jumped 26.4 percent to come to 243.1 billion won (US$217 million), the watchdog said, adding that victims lost an average of 670 million won every day in 2017.

Most of the criminal organizations that committed voice phishing scams were found to be based in foreign countries and have transfered what they swindled from local victims overseas, according to the FSS.

The majority of fraudsters caught here were ethnic Koreans who temporarily entered South Korea from China or foreign nationals staying here for a short period of time, the watchdog said, adding that they took part in the unlawful acts at the request of their acquaintances here to earn money.

As part of efforts to root out such financial scams, the FSS, along with the Korea Federation of Banks and the National Intelligence Service, plans to launch campaigns to raise public awareness by making and distributing related pamphlets.

The pamphlets outline details about voice phishing processes and punishable measures against the criminals, with the promotional materials to be available in Korean, English and Chinese.

"We will rev up efforts to prevent damages and ultimately eradicate such schemes by proactively launching diverse campaigns both for local financial customers and potential criminals," the FSS said in a release. 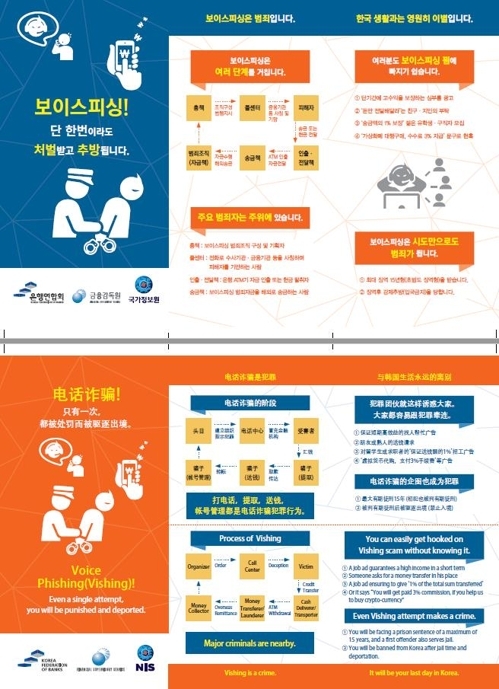