The DSC document, drawn up last year and disclosed by a ruling party lawmaker and a civic group last week, has emerged as a hot issue due to its shocking revelation that the military reviewed the possibility of imposing martial law and mobilizing forces in response to candlelight protests against Park.

On Tuesday, President Moon Jae-in ordered a thorough investigation into the case.

A local newspaper reported Wednesday that Defense Minister Song has been aware of the document since March but did nothing about it. Moreover, Cheong Wa Dae requested that military prosecutors look into the case, but Song brushed off the request, the report said.

"Cheong Wa Dae made no such request to the defense ministry for an investigation, and therefore, it is naturally not true that Minister Song brushed (such a request) off," presidential spokesman Kim Eui-keom told reporters.

Asked if Cheong Wa Dae received any report from the defense ministry about what it did about the DSC document, the spokesman said that the presidential office and the ministry have been exchanging opinions as to why Song did nothing even after he became aware of the document.

Kim said Song appears to have tried to deal with the issue within a broader framework of reforming the DSC.

The case has led some opposition lawmakers to call for Song to step down voluntarily to take responsibility. It also prompted speculation that Song could be sacked in a Cabinet shakeup Moon is reportedly considering carrying out.

"The president is taking various situations into consideration while listening (to various views)," Kim said. "However, it doesn't appear the president has made up his mind." 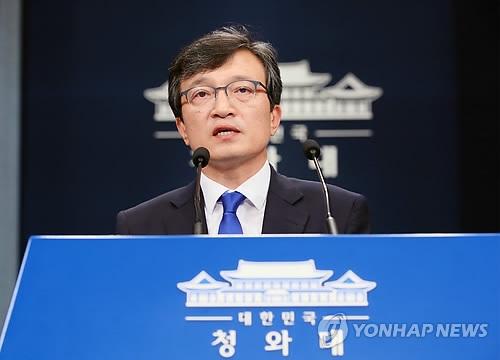