SEOUL, July 11 (Yonhap) -- After one year in office, Defense Minister Song Young-moo faces a series of daunting challenges, including restoring public trust amid reports of misdeeds by a key military unit and probes into sexual abuse allegations involving senior officers.

The retired admiral will mark the first anniversary of his inauguration Saturday, on a somewhat low note, with detractors decrying his recent verbal gaffe and the slow pace of a project to craft a defense reform blueprint.

The most immediate challenge comes from the public anger following the recent revelations that the Defense Security Command (DSC) drew up a document to explore the possibility last year of imposing martial law to cope with public protests should they spiral out of control after a court ruling on the impeachment of then corruption-tainted President Park Geun-hye.

Nearly six months of massive yet peaceful protests in Seoul led to the unprecedented dismissal of the former president, who is currently on trial for a string of corruption charges, including bribery and abuse of power.

After Rep. Rhee Cheol-hee of the ruling Democratic Party made the revelations last week, Song came under fire for failing to take timely steps to investigate the DSC document even though he was briefed on it in March.

The case has drawn the ire of the public, as critics say that any idea of using the military to handle public rallies runs counter to democratic principles, and that it could mark another case of the military's political intervention. 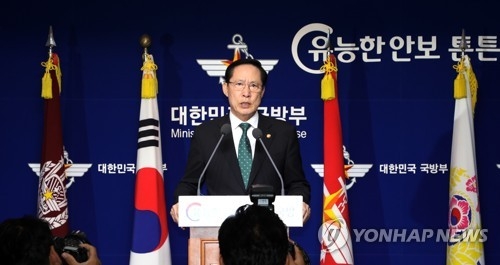 The public outrage over the DSC document came as the command has already been in a crisis of confidence amid criticism of its operatives' alleged political meddling and surveillance of the families of the victims of the 2014 ferry disaster.

Another tough task for Song is to complete the Defense Reform 2.0 blueprint aimed at reorganizing the military into a smaller yet more powerful one. The minister briefed the president twice, in February and May, on the reform proposals, but the plans have yet to be finalized.

Compounding the task is how to reflect the changing inter-Korean relations into the blueprint.

Over the last several months, Seoul and Pyongyang have agreed to a series of fence-mending measures, including the April 27 inter-Korean summit agreement to halt "all hostile acts" against each other in all domains, including land, sea and air.

In line with the peace mood, observers say that Song could face calls to readjust the centerpiece of the defense reform drive: the "three-axis" system that consists of the Korea Massive Punishment and Retaliation, an operational plan to incapacitate the North Korean leadership in a major conflict; the Kill Chain pre-emptive strike platform, and the Korea Air and Missile Defense system.

Maintaining the robust security alliance with the United States is another challenge.

Amid stepped-up diplomacy on the North's denuclearization, the allies have decided to halt a set of annual combined military exercises, including the Freedom Guardian originally slated for August -- a move that some fear could lead to a weakening of their defense readiness posture.

The coordination of the transfer of wartime operational control (OPCON) will also be a major alliance issue facing the minister.

In the allies' annual Security Consultative Meeting slated to take place in Washington in October, their defense ministers are expected to agree to a broad road map on the "conditions-based" OPCON transfer.

Shoring up public trust and troop morale in the wake of alleged sexual abuse cases in the military is yet another task. In recent weeks, two general grade officers have been put under investigation for sexual abuse allegations.

Adding to the already full plate of tasks is the criticism of his recent gaffe.

During the Monday meeting with counselors specializing in sexual abuse cases, Song said, "Women should be careful with their demeanor." As public criticism surged, he apologized for the "inappropriate" remarks.

Last year, Song also courted criticism with what critics called sexually offensive remarks. During a visit to the Joint Security Area in the Demilitarized Zone separating the two Koreas, Song told troops during a lunch meeting, "The shorter the pre-meal speeches and miniskirts, the better."