Hong's trip to Los Angeles came as he stepped down from the post of the party's head in June, taking responsibility for the conservative party's crushing defeat in June 13 local elections and parliamentary by-elections.

He is known to have plans to return to Seoul around the Chuseok fall harvest holiday in late September after taking a rest in the U.S.

The LKP suffered a crushing defeat in the elections, throwing into question what path the party will pursue in its efforts to regain public trust. It has been grappling with internal strife over the election results.

"It is good to have intense debates among party members. But if their efforts (to revive the party) end with stop-gap measures, tensions will go on," Hong told reporters at Incheon International Airport before his departure.

"I hope that after such an intense internal process, the LKP will eventually play its role as a healthy opposition party," he said.

Hong declined to elaborate on when he will resume his activities as a politician.

Meanwhile, the LKP moved its headquarters in Yeouido, which is located near the National Assembly, into a building at Yeongdeungpo-gu in southwestern Seoul, as it has decided to streamline its operations after the election failure.

"With desperate sincerity, we will spare no effort for overhaul and changes until people want us," Kim Sung-tae, the acting chief of the party, said. 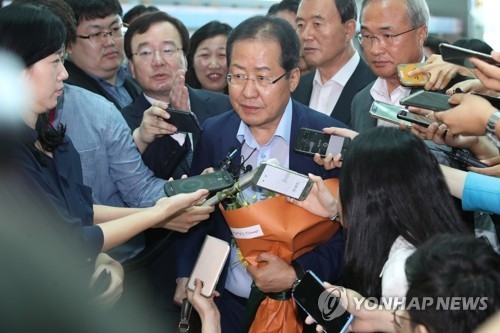