SEOUL, July 11 (Yonhap) -- Prime Minister Lee Nak-yon on Wednesday called for boosting domestic tourism, saying it is one of the most efficient ways to create jobs and revitalize regional economies.

"Deficits in our balance of tourism have been continuing for 17 consecutive years. In particular, last year's deficit amounted to US$13.8 billion, more than twice the deficit a year earlier. This is not an issue that can be taken lightly," Lee said during a national tourism strategy meeting.

"The best solution is to drastically increase domestic tourism by locals. This is not an easy task, but it's not impossible either," he said, citing a series of positive signs.

The number of tourism trips that locals made rose 17.9 percent last year to 285 million from a year earlier, while the amount of money spent on domestic trips also increased 14.4 percent to 29.45 trillion won (US$26.27 billion), he said.

"Tourism is very efficient in inducing employment. Tourism creates many jobs," Lee said. "One billion won of investment creates jobs for 8.8 people in the manufacturing sector, but the same amount can create jobs for 18.9 people in the tourism sector."

Wednesday's meeting was also participated in by the heads of local governments via video conferencing, and Lee implored them to do more to bolster regional tourism.

"Let's vitalize tourism," Lee said. "It's necessary not only for the country, but for each local government. The (central) government will support regional tourism promotion efforts."

Their plan includes a test operation of a visa-waiver program for Chinese cruise tourists as well as transforming small fishing villages into new tourist attractions. 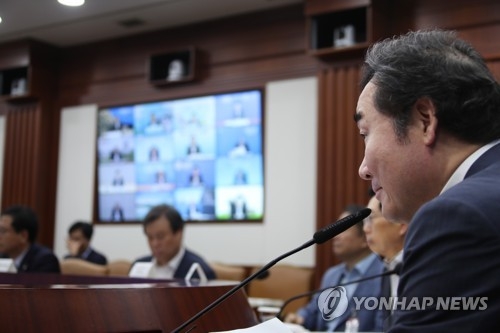