SEOUL, July 11 (Yonhap) -- South Korea's trade ministry said Wednesday it will get ready for a full-blown trade war between the United States and China after Washington ramped up its pressure on Beijing with a fresh set of items subject to punitive tariffs.

The U.S. government announced a list of additional Chinese products subject to high import duties. The list covers some US$200 billion worth of Chinese exports that could be hit by a 10 percent tariff. It's an extensive list of over 6,000 goods, including food products, minerals and consumer goods.

The latest move comes just days after the world's two biggest economies imposed tit-for-tat tariffs worth $34 billion on each other's goods, raising concerns that global economic growth will invariably take a hit and that other countries that ship goods with the two will feel the pinch going forward, including South Korea.

The Ministry of Trade, Industry and Energy said it will jointly study the extensive impact of the trade dispute on the Korean economy and its exports as well as the ripple effect on the local industry and companies doing business in the two nations.

"We will closely monitor the trade dispute's impact on the major export market and expand support for companies trying to enter alternative markets if needed," the ministry said in a release. 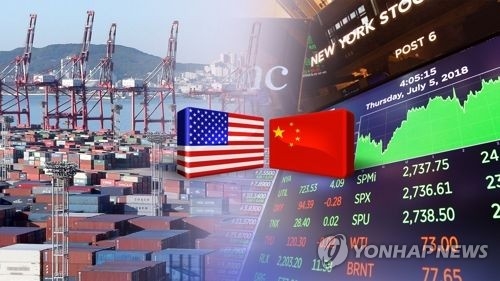 On Thursday, Kang Sung-cheon, the deputy minister for trade, will have a meeting with trade promotion agencies, industry associations and institutes to figure out the trade dispute's impact on the local economy and trade.

The Korea Institute for Industrial Economics & Trade (KIET), a state-run think tank, earlier speculated that a full-blown trade war between the U.S. and China will lead to a decrease in their trade volume and gross domestic product, which would in turn affect South Korean exports as well.

As a result, South Korea's exports of intermediary products to the two nations, especially memory chips, chemical products and auto parts, will be hurt by the fall in overall production for certain goods, the KIET said.

While the Seoul government claims the trade dispute will not be felt immediately by the local economy, the main concern is that the dispute could turn into a wider, protracted standoff with the two sides continuing to raise tariffs on thousands of additional products instead of negotiating a mutually acceptable settlement.