The local stock market opened lower amid concerns over the trade war between the world's two largest economies and went further south late in the afternoon as institutions went on a selling spree.

Following the U.S. announcement to impose an additional $200 billion of tariffs on Chinese imports, Beijing has vowed to take retaliatory actions, without elaborating on details.

"The trade issue seems to have triggered investors to lock in recent gains after three consecutive sessions of gains," said Seo Sang-young, an analyst at Kiwoom Securities.

Most large-cap shares were bearish across the board, with top cap Samsung Electronics surrendering 0.65 percent to end at 46,000 won. SK hynix, a major chipmaker, was down 0.57 percent to 86,800 won.

LG Display edged up 0.51 percent to 19,700 won after the flat panel maker announced the previous day that it won approval from the Beijing government to establish a joint venture to launch an organic light-emitting diode (OLED) panel plant in China.

Ssangyong Motor, meanwhile, jumped 4.74 percent to close at 4,750 won after its parent firm Mahindra Group's chairman Anand Mahindra unveiled a new investment plan for the carmaker during his meeting with South Korean President Moon Jae-in in India. Mahindra said a total of 1.3 trillion won will be invested in SsangYong Motor within the next three to four years.

The local currency closed at 1,120.00 won against the U.S. dollar, down 4 won from the previous session's close. 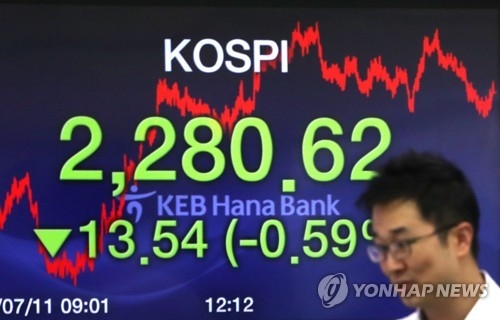