SEOUL, July 11 (Yonhap) -- Hyundai Group on Wednesday asked the government to allow its senior management to visit North Korea next month to mark the anniversary of the death of its former chairman, company officials said.

The memorial service for Chung Mong-hun, who spearheaded the now-suspended inter-Korean tour program in the North, had been held at Mount Kumgang every year since his death in August 2003.

Hyundai, however, did not seek approval for the visit in 2016 due to rising tensions on the Korean Peninsula. For last year, the company received the green light from Seoul, but Pyongyang rejected the request.

"We officially filed the request to the unification ministry today," a company official said. "For now, we need to wait for the government's decision. Once approved, we will soon contact the North."

The Ministry of Unification, which is in charge of handling ties with North Korea, is expected to approve the plan by Hyundai Group to visit the North, according to a source close to the matter.

Hyundai Group is likely to receive the ministry's approval as early as Thursday, the source said.

The company is known to be in talks with Pyongyang through its representatives who are currently in the North to repair the venue for the upcoming reunions of families separated by the 1950-53 Korean War.

The two Koreas agreed last month to hold family reunions from Aug. 20-26 involving 100 families from each side. They are currently choosing who will be invited to the event, which will take place at a Mount Kumgang resort on North Korea's east coast, with an aim to finalize the list by Aug. 4. 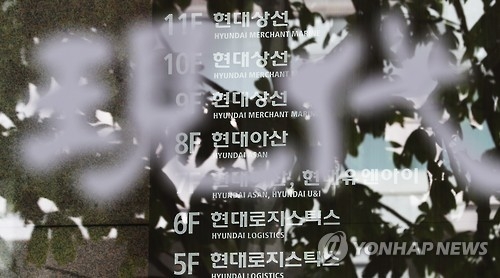