SEOUL, July 11 (Yonhap) -- North Korea said Wednesday that the Mangyongdae Prize International Marathon annually hosted by its capital Pyongyang has been recognized by the Association of International Marathons and Distance Races (AIMS). Its 30th competition will be held on April 7, 2019, it added.

According to the English website for the event (http://pyongyangmarathon.com), all foreign amateur runners are now able to apply for participation in next year's race, also known as the Pyongyang Marathon, through the event's official travel partner Koryo Tours, a Beijing-based, British-run company. 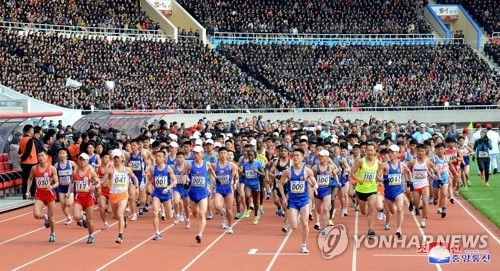 It also noted that all aspiring participants should be part of an organized tour group offered by Koryo Tours and that early applicants can receive discounts.

The Pyongyang Marathon has been held in April every year since 1981 in celebration of the April 15 birthday of the late North Korean founder Kim Il-sung. Foreigners were invited to the race for the first time in 2014.

This year's event was held on April 8, drawing 429 foreign amateur runners from 43 countries, a sharp fall from about 1,100 participants the previous year.

"You can run the 5k, 10k, half or full marathon. All four of these races take place at the same time and on the same day -- Sunday 7 April, 2019, and will be run on a course which is fully recognized by both the IAAF (International Association of Athletics Federations) and AIMS," the website said.
(END)