"President Moon evaluated the fact that economic cooperation between the two countries has steadily remained strong, noting South Korea signed its first free trade agreement with an Asian country with Singapore in 2005," Moon's presidential office Cheong Wa Dae said of his meeting with the Singapore president.

"He called for efforts to further expand the countries' cooperation in areas such as artificial intelligence, big data, fintech, bio and medicine by seeking joint research and sharing their technology and experience," it added. 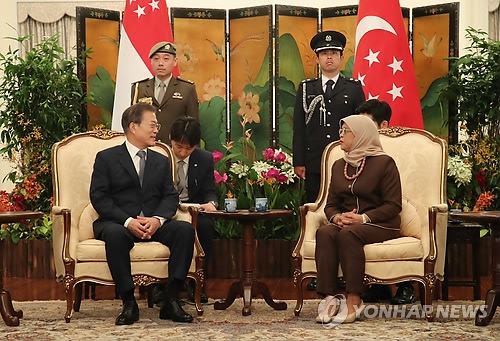 The visit began with an official welcoming ceremony hosted by the Singaporean president at her presidential office Istana.

Yacob welcomed Moon's New Southern Policy, which seeks to greatly improve South Korea's diplomatic and economic relations with its Asian neighbors, including all 10 member countries of the Association of Southeast Asian Nations (ASEAN).

"President Halimah suggested the countries work together to boost South Korea-ASEAN cooperation by seeking to create synergy between the New Southern Policy and projects that are being pursued by Singapore as the chair of the ASEAN this year," Cheong Wa Dae said in a press release.

Moon expressed his gratitude for the U.S.-North Korea summit held in Singapore last month, saying Singapore has contributed greatly to efforts to denuclearize the Korean Peninsula and establish peace by hosting the historic summit.

Halimah said her country will continue to actively support the South Korean government's efforts to denuclearize the Korean Peninsula, according to Cheong Wa Dae. 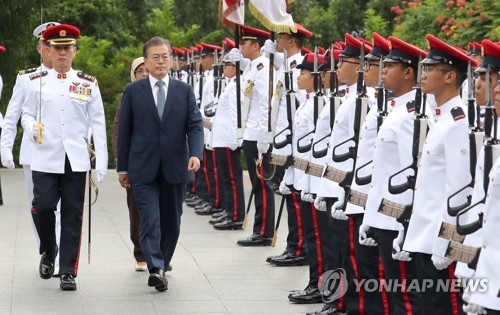 He is set to return home Friday after offering a special lecture for Singapore's top opinion leaders on his government's ongoing efforts to peacefully rid North Korea of its nuclear weapons and establish lasting peace on the Korean Peninsula.