"President Trump still believes that the agreement that was reached in Singapore where North Korea agreed to complete denuclearization represents a commitment that we can make progress on and we are going to continue to work through that," the vice president said. "We are not going to be sidelined or sidetracked." 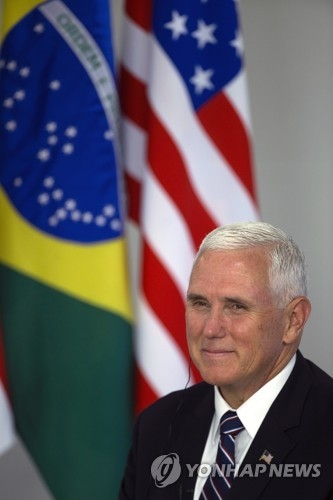 Kim committed at the Singapore summit to the "complete denuclearization" of the Korean Peninsula in exchange for security guarantees from the United States.

To flesh out the deal, U.S. Secretary of State Mike Pompeo flew to Pyongyang last weekend. He later said there was progress in his talks with the North Koreans but also admitted that a lot of work remained to be done, including on the issue of setting a timeline for denuclearization.

His trip followed a series of news reports that cited U.S. intelligence sources as saying the North continues to expand its nuclear facilities and could be deceiving Washington in order to extract concessions.

Shortly after Pompeo left, North Korea lashed out at the U.S. for making a "unilateral and gangster-like" demand for complete, verifiable and irreversible denuclearization.

On Monday Trump reiterated his confidence that Kim will "honor" the deal and accused China of meddling in the negotiations.

"China, on the other hand, may be exerting negative pressure on a deal because of our posture on Chinese Trade -- Hope Not!" the president tweeted.