SEOUL, July 12 (Yonhap) -- Defense Minister Song Young-moo on Thursday cautioned against rising speculation over conventional arms control with North Korea, stressing that the first step toward the goal is building confidence with the communist state.

Song made the remarks amid a flurry of reports on possible measures for arms control, such as relocating the North's long-range artillery away from the border and suspending the construction of the South's front-line military facilities.

"The most important thing (for now) is building confidence between the militaries of South and North Korea," Song told reporters two days before the first anniversary of his inauguration.

"After building full trust following general-grade talks, working-level talks and ministerial talks, (we can discuss arms control) ... The current talk of arms control in advance ... I don't think that sequence is right," he added.

To facilitate the trust-building process, the minister noted the need to start with measures that the two sides can easily enforce rather than making inordinate demands that could break the cooperative mood. 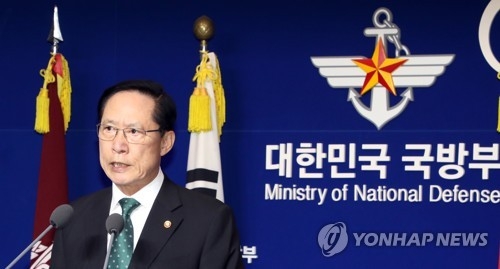 The talk of arms control surged after South Korean President Moon Jae-in and North Korean leader Kim Jong-un agreed in their April 27 summit agreement to "carry out disarmament in a phased manner, as military tension is alleviated and substantial progress is made in military confidence building."

Experts have said that the arms control process might proceed largely in three steps -- either in a linear progression or in a way that the steps are combined together to reach the disarmament goal. The first step, they said, is confidence building, while the second and third steps are "operational and structural" arms control processes, respectively.

The operational arms control refers to the repositioning of front-line military equipment or facilities to make them less threatening to a potential adversary, while structural control means literally curtailing the size of troops and weapons systems.

The two Koreas have recently taken some steps to enhance mutual trust, such as agreeing to fully restore their military communication channels.

Touching on the current mood for reconciliation and peace between the two Koreas and between the United States and the North, the minister said it is a double-edged sword.

"Regarding the inter-Korean relations, the U.S.-North Korea relations and the South Korea-U.S. ties, I have told my junior colleagues, as well as U.S. military officials, that we are expected to walk on a new, untrodden path," he said.

"There are two sides ... One is about challenges, while the other is about opportunities ... The military should prepare for both ... (but) we need to focus on (how we prepare for) the challenge side rather than the opportunity part," he added.

As for the direction of his defense reform drive, Song stressed such major objectives as enhanced civilian control over the defense establishment and the "balanced" development of the Army, Navy and Air Force.

"What would happen if civilian control does not work properly? Like the era of Japan's militarism, the military would control civilians and justify its control over the state," he added.

Mentioning the ongoing efforts to draft a defense reform blueprint, he dismissed concerns about dissonance among policymakers.

"It is not that we have differences, but we are in the process of reviewing what it lacks and complementing it," he said.

"There will, sooner or later, be an opportunity to explain to people the defense reform philosophy and its detailed process," he added.