SEOUL, July 12 (Yonhap) -- The head of South Korea's financial watchdog on Thursday called for brokerages to bolster their internal control mechanisms, after a series of blunders that raised concerns over the nation's stock trading system.

Yoon Suk-heun, governor of the Financial Supervisory Service (FSS), made the remarks during a meeting with chief executives of brokerages earlier in the day.

A massive "fat-finger" error by Samsung Securities in April has raised serious questions over whether the nation's trading environment is trustworthy. 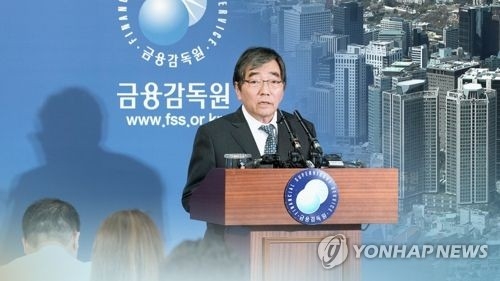 Citing recent trading blunders, including the Samsung Securities incident and a settlement failure of short selling transactions at the Seoul branch of Goldman Sachs Group Inc., Yoon said people's distrust of the financial industry is "deepening."

The FSS has set up a task force to help brokerages strengthen their internal control systems, Yoon said.

Samsung Securities has been dealing with a firestorm of criticism after it mistakenly paid stocks to its employees as dividends in April.

The brokerage had originally planned to pay dividends of 1,000 won (US$0.93) to its employees. However, it mistakenly paid 1,000 shares for each stake owned by its workers.

The chaos happened after a Samsung Securities trader made a keyboard entry mistake, typing "shares" instead of "won" in Korean when sending the dividends to employees.

The brokerage accidentally issued 112 trillion won worth of "ghost" stocks, and 16 employees at Samsung Securities sold off a combined 5.01 million shares. The sell-off occurred despite advisories about the mistake being sent to employees, raising concerns about the brokerage's trading system and moral hazard among its workers.