SEOUL, July 12 (Yonhap) -- South Korea's trade ministry said Thursday it is preparing for fallouts from the flaring trade dispute between the United States and China as the world's two largest economies are seemingly on a collision course that could have global repercussions.

Concerns are rising that Asia's fourth-largest economy could be among the losers of the protracted trade war between its top two trading partners after the Donald Trump administration unveiled an additional list of tariffs on $200 billion worth of Chinese goods. The action came just days after Washington levied punitive duties on $34 billion worth of Chinese products, and Beijing vowed to retaliate with equivalent tariffs on American goods.

"The government and the industry should step up a joint response because there is a possibility of the U.S.-China trade dispute dragging on for some time," Kang Sung-cheon, the deputy minister for trade, said in a meeting with senior officials of the promotion agencies and industry associations. 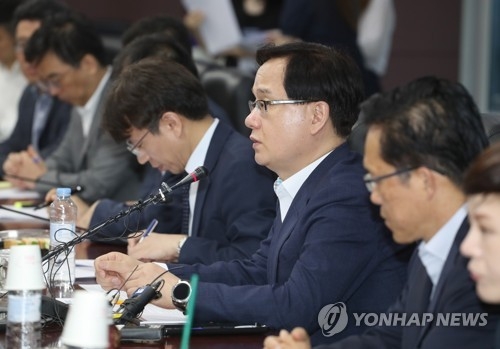 While the Seoul government earlier played down the previous tariffs' direct impact on the Korean economy, the expanded list of tariffs has unnerved exporters as memory chips, cars, computers and electronics parts have all been in the crosshairs.

"As Chinese electronics, computers and communications equipment were included in the additional list of tariffs, Korean companies are worried their exports of intermediary goods used in those items could decrease if the tariffs are imposed," the ministry said in a release.

While the tit-for-tat tariff dispute has raised worries over its longer-term effect on the Korean economy and trade, more urgent tasks lie ahead for Korean automakers as the Trump administration is mulling fresh tariffs on imported vehicles and auto parts.

The U.S. Commerce Department has been investigating auto imports under Section 232, the same legal authority that was used to slap tariffs on steel and aluminum imports on national security grounds.

Seoul officials say the fresh import restriction could come earlier than expected as Trump has directed his staff to push ahead with tariffs on foreign cars before the November midterm elections, seen as a move to woo working-class voters.

"We have to bear in mind the possibility of the 232 Section investigation report being announced before the November midterm elections," Kang said in a separate meeting with senior officials of carmakers and automotive associations.

To defend the local auto industry, Trade Minister Kim Hyun-chong will lead a delegation composed of government and company officials to the U.S. next week to meet with American politicians and business leaders. A public hearing is slated for July 19-20 in Washington, D.C.

In a written statement, the trade ministry said Seoul has already reflected U.S. demands in the auto sector in the recently revised bilateral trade deal and Korean automakers contribute to the U.S. economy by manufacturing cars in their American factories.

While Korean-made autos are exempt from U.S. duties under the bilateral trade pact implemented in 2012, market watchers say new tariffs of 25 percent could deal a heavy blow to local manufacturers and parts makers.

Out of 2.53 million Korean vehicles sold abroad last year, about 33 percent were shipped to the large North American country, according to data compiled by the Korea Automobile Manufacturers Association. South Korea exported 178,980 vehicles to the key market in the first quarter of 2018, down 22 percent from a year earlier.