SEOUL, July 12 (Yonhap) -- The Bank of Korea (BOK) on Thursday revised down its earlier growth forecast on the South Korean economy to 2.9 percent for 2018 due to rising economic uncertainties at home and abroad.

In the monetary policy meeting for July, the central bank slashed 0.1 percentage point from its earlier growth outlook of 3.0 percent published in April.

For 2019, the BOK also cut its growth estimate by 0.1 percentage point to 2.8 percent from its previous forecast.

It anticipated that private consumption will expand 2.7 percent this year and also next year, while facility investment will climb an estimated 2.2 percent in 2017, down sharply from its earlier forecast of 2.9 percent.

Construction investment will likely fall 0.5 percent this year, expanding from a 0.2 percent drop according to their previous prediction, amid government-led measures to cool down a property boom.

Consumer prices will rise 1.6 percent this year and 1.9 percent next year, getting closer to the target inflation of 2 percent on the back of rising oil prices, the BOK said.

Core inflation, which excludes volatile energy and food prices, is expected to post 1.4 percent this year and 1.9 percent next year.

The BOK also revised down its estimation of the current account surplus for 2018 to US$65 billion from $70.5 billion amid trade tensions between economic powerhouses clouding the global economy. 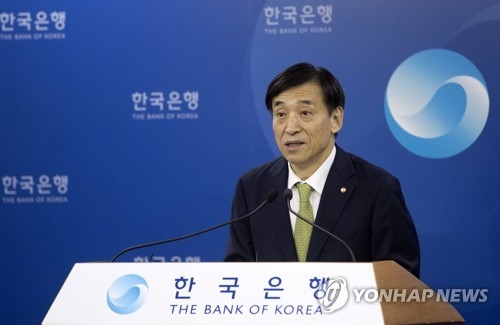 The adjustment came as the latest economic data including sluggish job creation and slowed exports raised concerns that the economy is losing steam and entering a downside cycle.

The monthly number of newly created job positions posted around 100,000 for the third straight month in June, marking one of the lowest figures tallied in a decade since the 2008 global financial crisis.

"Employment conditions are sluggish, given the data," said BOK Gov. Lee Ju-yeol. "The decline is largely driven by a change in demographics and the industrial structure and other productivity issues. It has become more difficult to expect 300,000 jobs to be created annually in the coming years."

Intensifying trade disputes between the United States and China also weighed heavily on the South Korean economy, as the countries are South Korea's largest and second-largest trading partners.

But the BOK said the country is on the right track to meet its growth potential on the back of private consumption and exports.

"Both growth and inflation are following the path that we expected in April," the BOK chief said. "But uncertainties rose high due to the global trade war. We will keep close tabs on such downside risks and manage the monetary policy carefully."